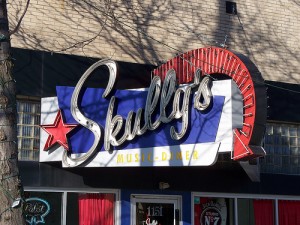 i had to tell this story…

so last night me and seance are at ladies 80s drinking beer, waiting to pass out some flyers for the new years show. we’re off in the cut standing right between the two bathrooms kickin it and this little ass dude walks up and just posts up next to us. dude was looking real serious. so we keep talking and clowning and dude is still there. dude is like “man, yall clowning over here!” but he still had that serious look in his face..real focused. at first i thought he might have thought we were in line for the bathroom, so i was like “we’re not in line for the bathroom” just so dude would know. and little dude is like “nah, i’m not going in the bathroom, i’m waiting on somebody to come out. i gotta handle some shit”. So i’m like “damn, you look real serious, is it about to go down?” and he’s like “yeah man, a muthafucka disrespected me and I’m about to handle that. hes in the bathroom, so i’m gonna wait for him to come out and see whats up.” so me and seance are like cool, we’re gonna post up here because this shit is about to get entertaining.

we ask little dude what happened and he said that big dude kind of pushed him aside and was like get out my way lil dude. he said he didnt appreciate it, so he was gonna confront him.Little dude was so focused and bout it and he couldn’t have weighed more than 125 pounds, max…and he was maybe 5’8 or so and didnt even look like the kind of dude who was on some scrappy shit.

so little dude goes back to waiting for another couple minutes, so you know the suspense is building on our end like whats about to go down, and then finally this BIG ASS DUDE walks out. This cat was like probably around 6 foot 2 and weighed at least 225 pounds. and soon as he walks out the bathroom, little dude rolled up to him and starts wispering some shit in his ear, talking to him real gangsterish. we cant hear what he’s saying to dude but you know something real is being said. i’m expecting the big dude to either fuck little dude up, or be on some leave me alone or i’ll fuck you up type shit, but what happens? BIG ASS DUDE BACKS DOWN AND WALKS AWAY.

So we ask little dude what happened and he’s like “dude said he didnt want no problems with me and just wanted to have a good time. then he apologized.” I was like “holy shit!”

I woke up today laughing about that shit. Little dude had the heart of a lion. That shit could’ve went real bad for him, but big dude saw that he was gonna be fighting this little cat to the death and didn’t want no part of that drama.