One of the early benefits of attempting to change my home production setup into a more mobile one is that it has made me question all parts of my creative process.  I’ve realized that there are certain points in my process where the momentum I have in creating art comes to a standstill. In most instances, this is caused by a technical flaw in my workflow.  A example of something like this would be not having enough midi inputs or cables to connect a drum machine that I really like. The fact that the drum machine isn’t connected all the time makes connecting it an inconvenience, and therefore reduces the likelihood I’ll use it. END_OF_DOCUMENT_TOKEN_TO_BE_REPLACED

I’m proud to finally release this animated music video for the latest single from the album Adventures in Counter-Culture, “Wanna Be Like You.”  The video was create by the talented artist Dax Norman.  Please check it out and share it on your blog/facebook/twitter if you like it. Here’s the audio recording for chapter three “Automatic” from my upcoming book The Making of Adventures in Counter-Culture, pre-ordering right now on http://printmatic.net

The Making of Adventures in Counter-Culture: Chapter 03 “Automatic” by BLUEPRINT

The one year anniversary of Adventures in Counter-Culture is today.  In celebration we are releasing the official music video for “Go Hard or Go Home.”  The music video was shot on the south side of Columbus and directed by yours truly, Printmatic!  If you like it, please share it on your Facebook, Twitter, & Blog.  Pick up the album HERE 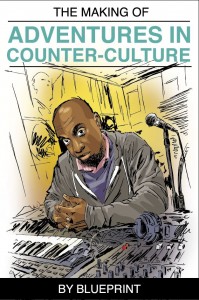 Last week, when I mentioned I was going to post a chapter of my upcoming book The Making of Adventures in Counter-Culture, there was a lot of interest in an audio version of it.  Well, the people have spoken!  Here's the audio-version of Chapter 10 “Radio-Inactive.”  The audiobook version will be available to download on Monday April 16th as well.  Pre-order the book HERE

The Making of Adventures in Counter-Culture: Chapter 10 “Radio-Inactive” by BLUEPRINT After a five-year musical journey, critically acclaimed mc/producer and Soul Position frontman Blueprint, returned in 2011 with his highly-anticipated sophomore solo album Adventures in Counter-Culture.  While praised by critics and considered his finest release to date, the story behind Blueprint’s musical departure went largely untold until now.  The Making of Adventures in Counter-Culture sees Blueprint emerge as an author, vividly recounting the stories that inspired him to create such a unique piece of art.  His writing leaves nothing unanswered – taking the reader through the creative process behind every song on the album – and describing in rich detail the circumstances that lead to his social commentary, his personal transformation, and his genre-defying album, Adventures in Counter-Culture. END_OF_DOCUMENT_TOKEN_TO_BE_REPLACED I remember when I was considering resigning from my job back in 2001, I went around getting advice from other self-employed people, in hopes of getting encouragement or advice before I made the leap.  One of the people I spoke to was named Todd Buck and he ran an in-home studio on the west side of Cincinnati that I would routinely use for mastering the first few albums I ever released.  He had just made the decision to move his studio and business out of his basement and to a larger one on the opposite side of town.  He had only been self-employed for a year at the time so I asked him for some advice. END_OF_DOCUMENT_TOKEN_TO_BE_REPLACED

Great interview with germanrhymes.de that I did while I was in Europe on the Rhymesayers tour.  This one came out really well.  Check your boy out.

Hello Friends.  Although it’s officially winter I would like to announce the Sunshine State of Mind Tour, a week-long headlining tour that will be brought to the sunniest of sunny places, Florida.  If you live in the state of Florida, I would like to officially invite you out to one of the shows. Thanks for the support, Hey Friends.  It’s been a while since I’ve written so I figured I would write one post that summarizes all the stuff that’s been going on.  This will also be my first newsletter that I’m sending to those that subscribe to my mailing list as well.  END_OF_DOCUMENT_TOKEN_TO_BE_REPLACED

Live footage from the Canadian leg of The Family Tour.

Adventures in Counter-Culture is out NOW! I’ve always had a weird relationship with the press.  For the early part of my career, from 1999-2003 when I was first putting out Greenhouse material on Weightless Recordings, they would either ignore us completely or clown us in the local weekly papers.  Then once Soul Position came out things improved, but its always been weird.  Sometimes good, sometimes bad, you take it with a grain of salt and you move on.  Along the way I stopped giving a fuck and realized that while the press can to some extent make a star out of somebody that shouldn’t be, they also can’t really do much for artists that are bi-products of a more grassroots approach–which I am.  I’m not sure if that realization means I gave up on their importance, or that I gave up on my potential to be a critics favorite, but I do know that things definitely changed for me.

But specifically, here’s my problem with press: END_OF_DOCUMENT_TOKEN_TO_BE_REPLACED Alright folks.  Today is the day.  My new album is in stores right now.  You can get it from itunes, pretty much any mom & pop store, on-line at fifthelementonline.com as well as chains like Best Buy.  I’m gonna spare you the sales pitch and just say that I’ve put a lot of time into it so obviously it would be great it you picked it up.  I’m going to be flying back to Columbus to do an in-store at Magnolia Thunderpussy at 7pm today, so I’m not going to be online a much until later, but feel free to hit this post up and let me know what you think of it if you’ve got it already.

Pre-order Adventures In Counter-Culture now from Fifth Element Online! You can still pre-order today and get the bonus materials! Every pre-order will receive a bonus Weightless Radio CD for FREE, a 27 track instrumental album of previously unreleased beats produced by Blueprint and only available at Fifth Element. The vinyl features a custom limited and numbered double LP picture disc in a full color printed jacket. It also includes an 8 page booklet with lyrics, liner notes, and digital download card. You don’t want to miss out on this exclusive deal, only from Fifth Element! If you live in Columbus, OH or the surrounding area then you won’t wanna miss this event.  The official release party for the new Blueprint album Adventures in Counter-Culture will be going down Saturday April 9th in Columbus, OH at Carabar (115 Parsons).  Doors open at 9pm, all ages are invited, and the admission is FREE.  Performers include Blueprint, Bottom Brick.  The music will be provided by DJ True Skills, and there will be a bboy battle from 9pm-1030pm from some of the freshest breakers in our city.  Please come through to check out the show and pick up the new album.

Thanks for the support! Single “so alive” from the album Adventures in Counter-Culture available on limited edition, RED vinyl.  Only 500 singles pressed and all individually hand-numbered.  Remixes by Budo & X:144 as well as all instrumentals.  Also includes a digital download card so you don’t have to encode the songs to MP3s yourself!  No excuse to not scoop it up!  Support the movement!

I started working on Adventures in Counter-Culture 5 years ago.  At the time I started working on it I was fed up with everything around me; television and its stereotypical and harmful images, commercial radio, the stagnation of the music (even in the hip-hop scene that I’m a part of), and society in general.  To me, there had become too many rules, too much routine, too much recycling of ideas and concepts.  So as far as I was concerned I didn’t want to be a part of of that anymore, even if it meant that I had to challenge even the things that I’m known best for as an artist.

That’s what counter-culture is.

So as I took on this task of trying to destroy everything I knew musically and socially, I immediately realized that there would be risk involved, but I made the journey primarily for me so I didn’t care.  I had to do it for myself.  Make the music that I wanted to make, become the person I wanted to be, free of expectations and rules, so that I would know that I’m not just another artist playing it safe like everybody else, making the same boring record over and over again just because it makes them money.

When this entire scene that I’m a part of began to pop off in the early 2000s, it was because the music was different and progressive.  It expanded and inspired many.  Unfortunately, there came a point where it began to recycle itself and became stagnant, depending on the same ideas, styles, and concepts to stay successful, but not growing.  That’s what I’m fighting against.  I realize that everybody may not be with me on that, or even understand my desire to distance my music from what I consider to be formulaic and boring, but there’s no turning back for me. END_OF_DOCUMENT_TOKEN_TO_BE_REPLACED

Here’s the second single off of Adventures In Counter-Culture! Watch the video below, buy the song!