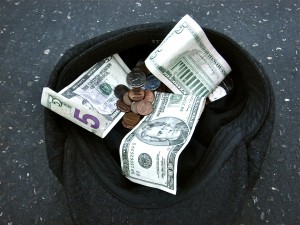 I’ve lived in my current Columbus neighborhood almost my entire life.  I did leave for college and to work for a few years in Cincinnati, but that was it.  The rest of the time, I was living in the same neighborhood that I grew up in. Most of my neighbors have known me and my family since I was just a little kid. The elementary and high schools I went to are both less than half a mile from my house.

Basically, I grew up on the south side of Columbus and feel really comfortable out here.  Most of that comfort comes from the fact that I understand my neighborhood. While things have naturally changed over time, I had never felt like I had seen anything out here that was out of place or flat-out bizarre.

That was until about two or three years ago, when I saw the first person panhandling out here. I had to admit it threw me off a little bit.  Not that I’m new to homeless people, because I’m not. Between working downtown in college and spending an insane amount of  time on the main strip of Columbus as an artist, I had come to believe that I had pretty much seen it all as far as our city’s homeless community goes: their usual hangouts,  their patterns, and even recognized a great many of them by either their face or their nickname. Although I live in the 15th largest city in the United States, it still has a bit of a small town feel to it, and everybody seems to know everybody. There are some legendary homeless people in this city that are as well known as any popular local celebrity.

However, I wasn’t thrown off by the reality of homelessness – it is a reality I have long accepted in this capitalist society we live in – I was thrown off by the fact that a homeless person could travel so far outside of their “normal” radius to panhandle.

See, I live in a small neighborhood.  It’s off a small minor freeway, doesn’t have any main street going through it, and is near a bunch of factories. My neighborhood is also devoid of any real commerce and is the epitome of middle-class. And if you think everybody knows everybody in the city, that definitely rings true for my neighborhood.

So, when I saw the first homeless person panhandling a couple years ago, my first instinct was that he had to have grown up out here, because there’s no way somebody would travel so far out of the way like that to panhandle.  For about two years, I would see this guy at the same spot; the freeway exit to my neighborhood.  For a long time, he was the only homeless guy I ever saw out here.

Then things started to change.  About 4-6 months ago, I started seeing different homeless people pop up at that same intersection.  I also started seeing them in other south side areas that i never saw them in before.  Slowly but surely, they got their numbers up.  Now I’m seeing homeless couples and everything.

I have been left with many questions regarding this.

Like most cities, the majority of homeless activity in Columbus is downtown, because there’s so many people with jobs and so much foot traffic.  From downtown they are less than a mile away from the affluent Short North neighborhood and a couple miles away from the Ohio State University, which has more people with disposable cash than anywhere in the city. Half a mile south of downtown is German Village, another affluent neighborhood.  What would make a homeless person take a ten-plus mile, thirty-minute bus-ride, through neighborhoods much more affluent, to panhandle in ours?

What do homeless people know about people’s capacity to give that I don’t know?  We are talking about human nature; something that a person who, for the most part, depends on others to eat is well versed on.  I had always assumed that people with less to give tend to give less, and those with more to give tend to give more (since they had it to spare), but I was starting to think my assumption was wrong.  Was it possible the homeless people were starting to travel long distances into middle class neighborhoods  because they knew that those middle class people had more compassion for them than the well off?

I let this question swish around in my head for a while, like a rum and coke that was too stiff to drink. Then a couple days later, while surfing the web, I saw an article that answered my question in dramatic fashion:

The Middle Class Is More Charitable Than The Rich

Obviously, giving to charity and giving to the homeless are two different things, but I think it’s fair to say that the inclination to give comes from the same place. Volunteering time, giving to charity, and giving to homeless people are all branches on the same tree. Those with compassion give. The way they give varies, but their capacity to give remains consistent.

Everything made sense now.

Homeless people were coming to our neighborhood because they felt we had the most compassion, not because we had the most resources.  They already knew what took me my entire life to figure out, which makes total sense considering their day-to-day survival depends on it.

As to the question of why we give more?  I’m not sure.  But I think it has something to do with the fact that most middle-class people in America know that they are one hospital bill, one paycheck, one lost job, or one missed mortgage payment away from being homeless themselves. That reality makes them feel closer to those who have it worse than them. On the other hand, those higher up the economic ladder (i.e. the rich and well-off), are farther removed from that reality. They probably have less compassion because they are more steps away from being homeless and therefore don’t identify with it as much.  Even during an economic recession, their lifestyles haven’t declined to where they would be worried about being middle class or poor because of one bad turn of events.

By no means am I writing this as an indictment of the rich. There are obvious plenty of giving wealthy people, who set a fine example by giving above and beyond their means. But this discovery does serve as a big eye opener. It’s made me revisit my previous concept of what compassion really looks like when it’s played out in real life, and has broken down some of the generalizations and stereotypes I had.

This entire thing reminds me of a conversation I had with a friend who was a waitress.  We were talking about tipping and how some people are shitty tippers.  I had assumed the people who tipped the worst were the college students and working class people because they had less to give. To my surprise, she told me that the people who were the worst tippers were actually the rich people. She said that, while there were some exceptions, most rich people tipped so badly that it was offensive. It was almost as if they had contempt for the waitresses and were trying to be assholes.  I was in shock.

I thought about my neighborhood even more.  Here we were, a small, isolated, middle-class neighborhood with not much to give.  A neighborhood full of hard-working and mostly blue collar families, that could have our houses foreclosed on at any point if we were to lose our job and miss a mortgage payment.  The biggest victims of the housing crisis and recession. Yet, we still had compassion for those that had less than us.  The homeless people would travel thirty to fourty-five minutes on the bus, through some of the most affluent neighborhoods in the city, because they knew that, despite our limited resources, our side of town had more compassion for them, and therefore more capacity to give.  It made me love my neighborhood even more than I already did.