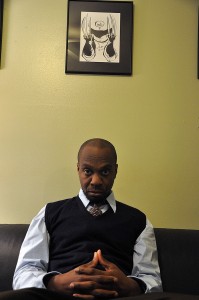 If you’ve been reading this blog for the past year then you know I’ve developed an interest in video/film.  It began last year when I stopped drinking and picked up a ton of books on video production and movie making.  Basically all I did last summer was read and ride my bike all over the place, two things I rarely did while I was drinking.  Shortly thereafter, I borrowed a friends camera and decided to get my feet wet by working on some projects for my friend and fellow artist Latimore Platz.   The first was a series of videos called “Who is Latimore Platz?” and the second was a music video for his song “10 Stone”.

After those I felt a little more confident in my work, and decided to put together the concept for what turned into The Adventures of Blueprint. I pitched it to Rhymesayers as something that I would direct and produce and they liked it enough to use as the main on-line component for Adventures in Counter-Culture, which to me was a huge confidence booster, especially knowing how critical they are.  It made me feel like maybe I could take on more and more ambitious things, but once the campaign for my record started I found that I didn’t have nearly as much time to work on video projects as I initially thought I would.  I started touring in February of this year and prior to June I had only been home a combined 2 weeks.   While I was on tour in Austin I found somebody on craigslist that was selling the camera I had my eyes on (canon t2i) for super cheap, so I picked it up and started taking pictures again, in hopes that when I had time to sit back down with video I would have a better understanding of photography and therefore be able to capture better images.

Well, it’s time to get busy.

A few weeks ago, I decided that I finally had the confidence to try my hand at directing a music video for myself.  So I recruited my homies Bridget and Nate to help me–since it’s impossible to rap and shoot yourself rapping at the same time–and we started shooting.  This past sunday we finished, and I started the editing phase.  As of right now the video is about 90% done, which means that I’m just adding bells and whistles to it to make it look fresher.  To be honest, I’ve definitely found myself being much more critical this time around, probably because I know people are gonna actually see it and I don’t want it to fall short of expectations (my own as well as the viewers).  But the good thing is that I corrected a lot of mistakes that I made in my first video–like not knowing what and how important white balance is for example–so I feel better this time around.

It’s wild how in a year you can go from being a person who dreams about doing something to actually doing something.  And it doesn’t even have to be at a professional level, I’m a believer that participation in anything that inspires you is special and gives us the kind of motivation that we need to carry on in this fucked up world.  I still consider myself a musician first and foremost, and a novice at video.  And while I don’t plan on changing that anytime soon, it’s good to have hobbies you can count on to keep you inspired and challenged.

So the obvious question is “when is this video coming out Print?” Well, hopefully very soon.  I still have to tighten up a few things about it, and present it to the powers that be at Rhymesayers for their feedback, but as soon as I know you’ll know.  However, If you’ve read this far then it’s only right that I let you check out a brief snippet of it.

Please check it out: