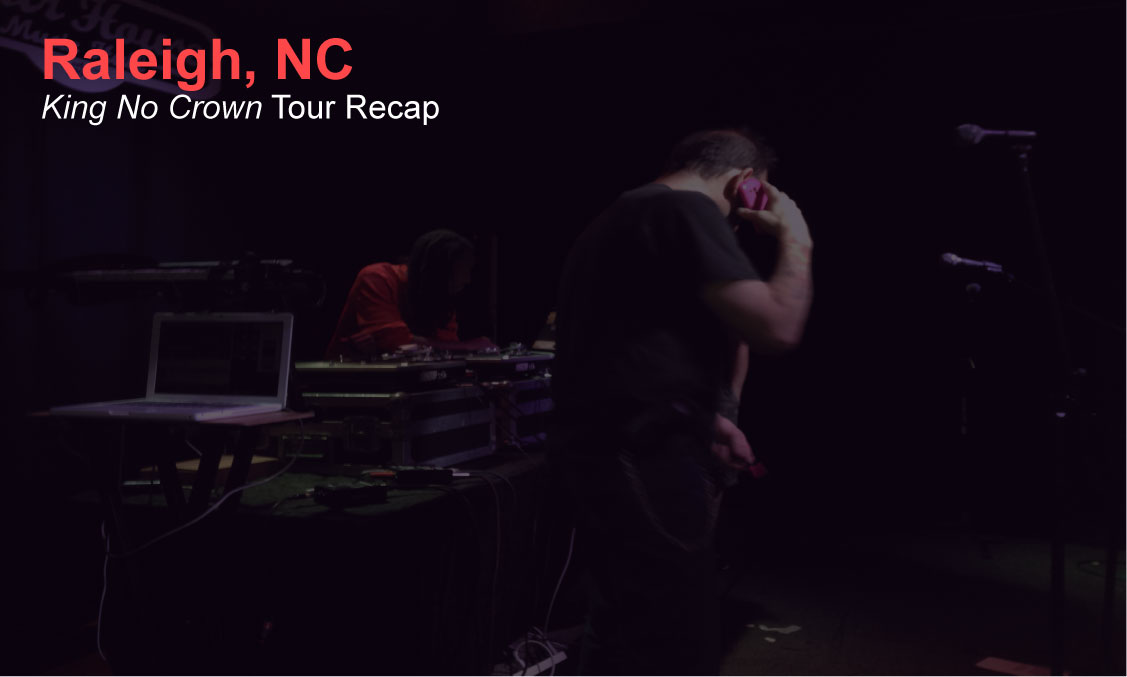 I’ve always had a good vibe about Raleigh, NC.  Part of it has had to do with the fact that when Illogic and I played a show in Chapel Hill in the summer of 2013 in front of about 10 people (summer shows in college towns are usually a bad idea), the entire crowd had driven in from Raleigh.  Seriously, not a single person from our show was from the city we played in.  Another part of my love for Raleigh comes from the fact that, even though we had a pretty bad show that night, I met a few really awesome people from the Raleigh scene that I continue to keep in touch with.

After our bad Chapel Hill show in 2013, we had an off day in Raleigh. That night I stopped by an open mic and performed a couple of songs.  The crowd absolutely loved it and I made some new fans.  Then after the open mic, my guy Cesar Comanche took me to the Sunday Cypher at NC State. It’s basically a huge cypher of MCs just freestyling in this small little tunnel on the college’s campus.  I stayed and observed, then shared a short rhyme at the end. Almost nobody there knew who I was, which made it a really pure experience.  It took me back to back when I first started developing my style; going to open mics, freestyle cyphers, and battling.  We all went to grab some food after the cypher to wrap up what was a great off day in Raleigh.

I say all that just to reiterate the fact that I’ve got a lot of love for Raleigh, North Carolina.

My first headlining show there in 2014 was small, but the energy was really dope. Dope enough to where I new we had something strong to build on and should keep coming back as often as possible.

I’m glad we did, because the King No Crown show in Raleigh was the best show of the tour so far. The line-up was super dope.  Cesar Comanche, K-Hill, and Defacto all put on great opening sets.  The crowd showed up early and watched every single performer play. The host, Tucson, was actually a fan of the artists playing so he kept the crowd engaged and knew how to introduce each artist properly.  Even better, he is a dope MC himself, which made his stage presence even more commanding.  Every single performer had a great set and energy in the room was great.

The soundman Jack was, by far, one of the most entertaining soundmen I’ve ever met. When we walked in for load-in he told me point black that he was a bit annoyed by the video shoot they had just finished in the club.  He said that his dad’s name was Al too. Then he told me that he was hammered from drinking at the video shoot all day; which I could tell anyways.  But despite being drunk as hell, Jack was a great soundman.  He complimented us on our professionalism and checked in on us to make sure things were cool all night. I’ve never seen anybody that drunk be that good at sound.  Jack was basically the Ol Dirty Bastard of sound; a drunken virtuoso. It was amazing to watch and a pleasure to work with him.

There were several people who drove into the Raleigh show from up to an hour and a half away.  That’s always good to see.

Supastition put on an epic set. With him being an hour from his hometown, the people were rocking with him, singing the words to all of his songs.  It was the perfect setup for me to close out the night.

Personally, I felt as though the level of the performances before me allowed me to have one of the best performances of the tour.  The strap on my keyboard even broke during one of my solos and I still kept rocking that shit.

Considering it was a Sunday of Memorial day weekend, a day that can either be feast or famine for throwing shows, our turnout was strong.  One of the coolest things about this show was that 90% of my fans in the room weren’t at my first show there and had never seen me play before.  It gave me a great sense of validation about my desire to tour more and how people are spreading the word about my music to their friends.

People bought more merchandise from me in Raleigh than in any of the previous shows on the tour.

Two years after not even being able to get a show in Raleigh (and having to play Chapel Hill during the summer), we were had a great show there.  I can’t say enough positive things about that city.  Thanks to everybody that made it out.

I can’t wait to go back.