For the past couple of months, I’ve been considering writing a book about how to become a better live performer. I’m still in the brainstorming stage of writing down rough outlines and topics that I think should be covered, but so far it’s going pretty well.  If I get a solid enough outline I’ll give it a try.

I would like to start giving some basic tips about performing here.  I’ve realized that what is unspoken and normal to me may not be normal to others, especially those that are just starting out.  I would like to share these things from time to time.

The first performance tip I have is to start early.

There’s a military saying that goes something like, “we don’t have to get ready because stay ready.”  Being in the military is about preparing soldiers to perform in situations of conflict or battle. From the time they enlist, soldiers are constantly training and preparing themselves for battle.  They have no idea when they’re going to actually apply that training in a real life situation, but they are always ready because they are always preparing.  They don’t have to get ready because they stay ready.

The problem is that many people are fooled by performers who make performing look so easy and effortless.   The unfortunate consequence of making something look easy is that people actually think it is.  It’s not easy.  In fact, it takes an extreme amount of preparation to make a live performance look effortless.

But it can only look effortless if you prepare.

The key is to get to the point where what you do is instinct and natural.  Where the feelings and movements just flow, without you thinking about them.  When you haven’t practiced that much, you get on stage and over-think things.  It feels unnatural and you look uncomfortable.  No artist wants that but it happens all the time.

The main things you should be concerned about are how far in advance and how many times per week.

How Far in Advance?

Here’s an example.  Even though Adventures in Counter-Culture wasn’t released until April of 2011, we started preparing around November.  I met with my bass player Bobby Silver twice a week during those initial preparations and we worked on song arrangements and teaching him the material.  Our first shows weren’t until the end of January, but we wanted to be really on top of it.

I don’t think it’s unreasonable to start discussions about the material a few months out.  That way there’s no last-minute pressure to come up with something new or creative the night before the show.  The more familiar you are with the material, the more ideas you will come up with.  You will have plenty of time if you start early.

How Many Times Per Week?

Once a week is good when you first start preparing, but as you get closer to the show you should increase the rehearsals.  I don’t think rehearsing at least two to three times a week for an hour each day is unreasonable.  Nobody likes rehearsals, let’s be clear about that.  Nobody.  So expect to get some initial resistance from some people about starting so early.  However, starting early allows you to keep the rehearsals short, and that’s great for moral.

I have a show in Minneapolis in two weeks, but I started rehearsals with my backup DJ last week.  We rehearse one our per day, five days a week, weekends off.  We usually only run through two or three songs in a session.  It’s so much less pressure than to wait until the week of the show and try to cram in all that material.  Although we’ve still got almost two weeks before the show, we both feel really confident about everything we’ve done because we’re so ahead of the game.

I also want to say this so that there’s no confusion.  I believe that practice is what you do by yourself.  I practice my rhymes when I’m in the shower, riding my bike, or in the studio.  That’s my job.  Rehearsal on the other hand is what happens when I meet up with the other people I perform with.  Rehearsal time should be spent on the actual performance of the material, not on learning the material (unless you make a change to that material and need to bring everybody up to speed).  If you get to rehearsals and you don’t know your part of it, then you will be wasting people’s time.  Don’t turn rehearsal into the very thing that makes people not want to do rehearse in the first place. 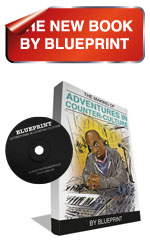 The Making of Adventures in Counter-Culture