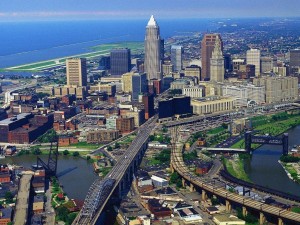 The first time I played a show in Cleveland was around the year 2000. I was still living in Cincinnati at the time and the rest of my crew lived in Columbus.

We had just released the first Greenhouse Effect and Illogic CDs and were beginning to play shows outside of our city.  Everybody was still working full-time jobs, so doing shows felt more like weekend getaways than touring; Inkwel would get the rental car, we would drive a couple hours to play the show, and all be back home by Sunday morning.  Back in those days we would usually roll at least six or seven deep to the shows: Me, Inkwel, Manifest, Illogic, Plead the Ph5th, DJ Drastic, DJ True Skills, and our dude Juan who did merch.

Outside of Columbus and Cincinnati, the first real out of town shows we played were in Dayton, Louisville, and Cleveland.  We had been trying to get to a show in Cleveland for quiet a while but had a tough time pulling it off.  We had friends from a group called Edotkom that used to live in Columbus, and had just moved back to Cleveland where they grew up.  They were helpful in getting us in touch with some promoters, but their scene seemed much harder to break into than the other cities in Ohio.

There were only two promoters doing the kinds of events that we would have been put on back then: Tye Down Production (Tyler) and Nappy Head Entertainment (Poo Man Chu).  Nappy Head had a monthly event called Kings of the Iron Mic that featured performances from local emcees and crews.  The fact that it had a name that was taken from a Wu-Tang Clan song title automatically made us want to play it, but I don’t think we were never invited.  Tye Down was an independent promoter as well, but focused on booking national acts and having local groups open for them.  We had only been on the scene for about a year and were getting pretty popular in Ohio but our music hadn’t reached either of those Cleveland promoters yet.  Some of the hip-hop crews I remember being active in Cleveland at that time were Edotkom, Rime Royal, Spittin Image, Iyan, Espionage, The GI Joes, and Paulie Rhyme.

Although Paulie Rhyme was a primarily performer in the scene, he also threw events from time to time, and consequently ended up booking us for our first show in Cleveland at a venue called the Rhythm Room (that closed down several years ago).

In those days there weren’t a lot of different rooms you could play a hip-hop show at in Cleveland: The Rhythm Room, The Grog Shop, & The Symposium were the main ones.  From what I understood, the Rhythm Room was easier to book than the others so there were a lot more hip-hop events being thrown there in the early 2000’s.  Unfortunately, the Rhythm Room had a real strange layout.  You walked into the club on the main floor where the bar and tables were, but the stage was actually located a level beneath you.  As a result, people on that top level could watch you from up there and not even go down to the stage level.  It was also really confusing as a performer, because you didn’t know who you should be playing to: the few people who made the journey to the lower stage level or the people who were above your head and looking down on you.

Because we were basically unknown in that scene at the time, we were also dealt another difficult situation: the early show.  Our show was to run from 6pm to 10pm because they had another hip-hop show taking place after ours.  Although I have somewhat of an all-ages draw now, back in those days we didn’t have any.  All of our fans were hip-hop heads who were over 21 and liked to drink.  So that pretty much let us know our attendance wasn’t going to be that great off top, but we tried not to let that discourage us.

Looking back, I think I was the only person that had any fun at that show.  I think less than 15 people were there and most of those were performers or their girlfriends.  It was just too early on a Saturday to watch Greenhouse Effect and Illogic rap.  The only reason I had any fun was because I was the first person in the crew bold enough to say fuck it and have a few drinks.  I sat at the bar for the first 2 hours, when absolutely nobody was coming into the club and flirted with the bar owner.  I can’t remember her face but I do recall her having a crazy body on her.  I was the only cat in there drinking.

The show itself was a blur.  We did our thing but everybody in the crew was pretty discouraged, so their energy was off.  My energy, on the other hand, was amazing.  From the moment we walked into the club and I saw that we were taking a nosedive I had decided to not take things as seriously and try to have some fun.  Unfortunately, nobody else had adopted that attitude.  That show was the first and only time that I heard anybody in my crew say that they wished they would have stayed home.  I couldn’t blame them for feeling that way.  We were an extremely positive crew and managed to maintain a positive attitude even during the toughest moments of pursuing music.

Nobody was really at our show so we ended things around 9pm and stuck around for a bit talk to all our friends from the Cleveland hip-hop scene.  While we were talking I saw a group of guys who were performing at the show after ours walk into the club.  They were some rugged, M.O.P looking dudes, so I already knew what their music was going to sound like.  After getting their equipment setup, and checking some of their sound, one of them approached me and told me that I was going to have to pay the admission fee.  I was already drunk and started laughing at his request, which probably wasn’t the best move.  I told him that we just finished our show earlier and we weren’t there to see them.  He wasn’t satisfied with that and said that I was going to have pay or get out until doors opened because he had seen me listening to their soundcheck.  Being the drunken smartass I was at the time, and failing to really understand how grimey and violent Cleveland can get in an instant, I laughed and told dude I didn’t know who they were and wasn’t paying any attention to their soundcheck.  After I said that, I saw the expression on this guys’ face change from “I’m having a bad day” to “I’m about to fuck you up.”  I started to sober up and see that this cat was a lot bigger than me and was was pretty much at the point of no return because I was clowning him so hard.  At that point, I made a split decision to do something that I’ve never done before.  I opened my arms, walked up to him, and hugged the shit out of him.  I was like “I love you dude. it’s cool” and hugged him real tight while he was trying to say “nah, fuck that.”  Then I walked away and out of the club while he stood there stunned.  I didn’t look back because I knew he wasn’t going to swing on me.

I always think of that story whenever I play shows in Cleveland.

I will be making my return to Cleveland, OH on Saturday June 9th @ Saigon Plaza (5400 Detroit Avenue)  as a part of the Weapons of Mass Creation Music Festival.  I think tickets are $15 for the whole day, which includes at least 10-15 great bands and an outside b-boy competition.  I play around 10pm so please get there on time, as festivals are pretty strict on their schedules.

Hope to see yall out.