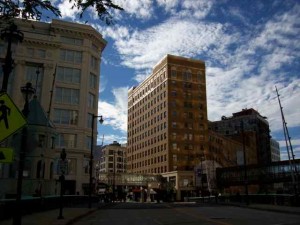 My first time headlining a show in Milwaukee was in 2005 right after 1988 came out. My dude Kid Cut Up brought me out and the show was dope. However, there was a lot of ruckus that night. From what I remember there were at least two girl fights, one near brawl with a dude that we knew that I had to calm down, and the dude working security was in a couple fights as well. I remember playing chess in the corner of the spot with a Russian chick to stay outta the way.

Well, its good to see that Milwaukee hasn’t changed.

I continue to see wild shit when I play there.

During my set some dude started throwing something towards the stage. I didn’t see it at first but rare groove did and said something. Then we realized that he was throwing money. Balled up bills. I don’t know if dude thought that was a cool gesture of support or what.  But I would much rather have had him just buy a CD.  Needless to say I didn’t pick it up. Groove was like “what they fuck? What u think we are, strippers? Fuck that.“

Saw a chick take a nasty drunken fall right in front of the merch table.  It was ill how she pivoted like she was about to turn around, but then wiped out right on her back.  She was a taller chick so it looked like she was falling in slow motion.

Another chick came up to the merch table and said she wanted to meet “dude w/ the dreads and pony tail“, my dj rare groove. Then when she shook his hand, she was like “guess who you remind me of?” he said “who?” and she said “bob marley!” Groove looked at her like WTF?  I was like “wow, that’s the most original shit I’ve ever heard. How did you come up with that? You’re amazing!“

White people, for the love of God please stop saying that any black person w/ dreads looks like or reminds you of Bob Marley. You’re embarrassing yourself and every other white person with good sense about themselves with that shit.

So me, groove, and Budo started clowning her.  Then she got all sensitive like “why are yall fucking with me?” and we were like “shit, you started it. bring it!“

Her girlfriend saw it wasn’t going to well, grabbed her by the arm and walked her away.

About five minutes later, there were two black dudes at the table and this white chick cut through a bunch of people already in line, came up to one of them and was like “oh my god there’s black people here!” trying to be funny. I think she knew the dudes somehow, but the dude looked at her like “bitch you’re embarrassing me” and didn’t even respond even though she said that shit loud as fuck.  I was like “you know her?” and he just had the stone faced, fuck-this-bitch expression.

Saw a fight in street as I was headed to the after party.  One dude slapped the second dude like 2-3 times right out in the middle of a busy area.  Then another dude jumped in and they started slappin eachother back and forth.  I kept dippin.

I was dancing with this chick at the after party who told me no less than 5 times that she wished she had a “ghetto booty”. Im like “cut that out”, but she insisted nothing was wrong with what she was saying because she really wishes she actually had a “ghetto booty”.  I think she even turned around and put her hand on her ass every time she said it to me.  White women, please stop using the term “ghetto booty”. I beg of you.  It’s not a good look.

I decided to bounce and go to sleep.

As I was leaving the after party I saw a pack of chicks drive past another group of chicks and yell out the window loud as fuck calling them all ugly. The walking chicks yelled back.

Shit was wild, as usual.

I know it seems like I’m not talking about the show much, but I figured that’s not as interesting as the city of Milwaukee is as a whole.

I came across a lotta people that were real aggressive for no good reason.  Sometimes they would be aggressive about being nice to you, which is some wild ass shit.

However, a cat that came to my Madison show in March came out.  When he came to the show in Madison a few months back he snuck a big ass bottle of vodka in the club for us.  He will always be my dude for that.  This time he brought me one of those tiny, key-chain, voice recorders.  As soon as I saw him standing in line for merch I recognized him.  It was fresh. Dudes like that make you forget about the knuckleheads.

I met a LOT of cool, nice, normal people at the show as well.  People who encouraged me to keep doing what I’m doing, and picked up vinyl, cds, or a t-shirt–or just gave me props.  Its just unfortunate that knuckleheads are always trying to make their presence known so much.  But truth be told they actually make the cool people stand out even more, so maybe that’s a good thing.

But in case you’re wondering, yes the show was fresh. I think the energy of the Madison crowd was a little better, but Madison crowds are hard for any city to compete with.

Some pics for you: