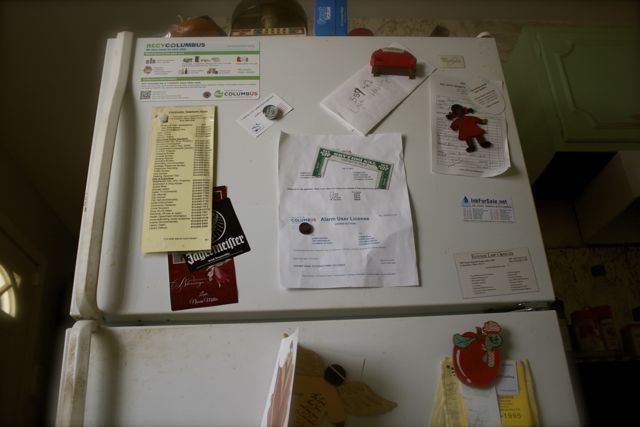 The first thing I noticed when I walked through the door, after returning to Columbus from visiting my family for the Christmas holiday, was the ungodly sound my refrigerator was making. Loud enough to be heard throughout the entire house, it sounded like the moaning of a person that had just been shot in the stomach and was waiting on the ambulance to show up. Although my refrigerator had been making weird noises for months, this was far worse than any of the random rumbles and shakes I’d only previously heard in the middle of the night.  This time, it was for real.

I opened up the refrigerator door and saw that everything inside of it was room temperature and everything in the freezer was completely thawed out.

My refrigerator had officially kicked the bucket.

It was the last thing I wanted to see after the 12-hour drive I had just finished.  To make matters worse, the sour smell of the thawed out food was getting noticeable. I sat down at the kitchen table to think about my options.  It was a Friday night, so there weren’t really any.  I was too tired and had too much already scheduled to try to find a new fridge, so it was going to have to wait until Monday. In the interim, I went to the grocery store to pick up some fruits, vegetables, and other things that didn’t need refrigeration to last a few days.

When Monday came around, Columbus was greeted by one of the worst snow storms we had experienced in years; 8 inches of snow and -10 below temperatures.  I immediately knew I wasn’t going to be running around shopping for a refrigerator in that weather, so I made due with the fruit and vegetables I picked up over the weekend.

By Friday, I was headed out of town again, this time to Florida to play some shows with Solillaquists of Sound.  I got back to Columbus ten days later and, once again, was faced with the same scenario I had encountered the first time around: I was wiped out from the drive and I got home so late that I was too tired to try to search for a new fridge until Monday.  I bought more groceries to last me until I had time to start my search.

I saw a fridge in a local appliance store I wanted to buy on Monday, but their delivery schedule was filled for the next few days, so I told them I’d be back to the next day to pay for it and get the delivery scheduled. Unfortunately, we got 8 more inches of snow on Tuesday, another 3-4 inches of snow on Wednesday, and Thursday marked the beginning of a two week stretch of temperatures that hovered between 10 and -10 degrees outside.  The snow at my driveway turned into rock solid ice and made it almost impossible to get in and out.  I knew I needed a new refrigerator, but I wasn’t about to go out in that weather and search for one when I already had food in the house. I decided to put it off until I felt like dealing with the weather.

At that point, I had been living a full month without a refrigerator.

By February, I had completely stopped doing that weird thing people do when they walk into the kitchen and instinctively open the fridge when they’re bored.  I knew my fridge was broken, so I just ignored it.  Pretty soon it became just a big ass white box sitting in my kitchen.

I had picked up a routine of going to the grocery store two to three times a week and spending $10-$15 each time.  All of my meals were made up of fruits, vegetables, and some sort of grain–things that were cheap and could be kept for a few days at a time.

Around the middle of February I realized how long I had went without a refrigerator and began to wonder how long I could keep it going.  I started to take it as a personal challenge.

It has now been over three months since I’ve had a working refrigerator in my house. I’ve been able to make it work because I had already pretty much phased out processed food and I also rarely eat meat. Those two things seem to require the most refrigeration.  Everything else would be eaten within 1 to 3 days of me buying it.  At that point, I’d go to the grocery store and pick up some more fresh stuff.

It became clear to me that as much as I thought I couldn’t live without a refrigerator, I actually could.  It isn’t really a necessity.  Hell, humans were doing great for thousands of years without them, and all I was really doing was returning to that lifestyle by eating a plant-based diet.  I feel great and to tell the truth I don’t really miss it at all.

I wanted to share this experience because sometimes in life we fall into the habit of doing things just because we’ve always done them, or we keep things around because they’ve always been there.  We are creatures of habit.  But it’s refreshing to know that most of the stuff we think we need isn’t a necessity.  We can live simple and fulfilling lives without many of the things we utilize today, just as our ancestors did, and it might actually improve our quality of life.

The refrigerator is just an example, but I’m sure this could be applied to many of the items we surround ourselves with. For example, the loss of an internet connection might force us to have more phone conversations and provide the benefit of improved personal connections.  A car breaking down might force us to walk more and provide the benefit of improved physical health.

What’s most important is that we always view life with enough historical perspective to understand humans were happy and healthy without most of the amenities we currently surround ourselves with.  As a recording artist, I constantly remind myself that most of the albums I consider classics were recorded with 1/100th of the technology and processing power I have on my old Macbook.  Fifteen years from now, the technology we consider cutting edge will be considered vintage. Technology and material things will always evolve and become more sophisticated over time, but simplified ways of living and creating will always exist. Handwriting will not go away simply because we can type faster, nor will home gardening disappear because we can buy fresh fruit and veggies at the grocery store.

Questioning the necessity of these things is important. It allows us to drill down to the things that really make us happy and healthy. And once we cut through the hubris and identify what really makes us happy, we can begin to live happier and healthier lives.