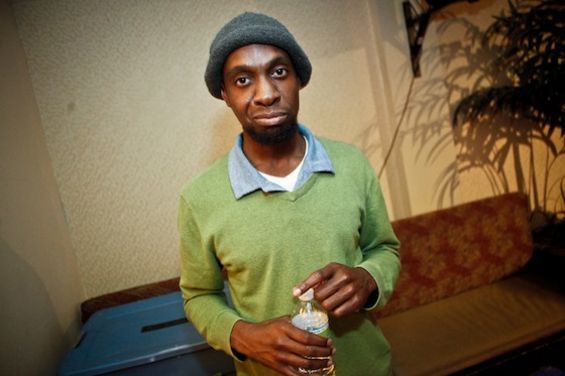 At last night’s show in Winter Haven, FL, somebody in the crowd asked me to perform my song “Blame it on the Jager.”  It’s one of the more popular songs from the Soul Position album Things Go Better with RJ and Al so it wasn’t an unusual request.  In general, I actually like spending a good amount of time during the end of my set performing request from fans, but the request for “Blame it on the Jager” wasn’t going to get granted last night.

That’s because today, May 15th, marks my fourth year sober.

My immediate response was “that might be a little weird for me since I don’t drink anymore.” Then I told the crowd that I was I was actually four years sober today and they all clapped for me in support.  I made a joke describing my relationship with alcohol as being really similar to a relationship with a person you invest a lot in who never gives you anything back…kind of like a gold digger.

It may seem like weird analogy, but after being sober for four years now, it’s hard not to look at it that way.  Every year that I maintain my sobriety, I’m able to look back on my alcoholic days with more and more clarity.  And with clarity comes the realization that I invested many years into something that never gave me anything back.  Lots of time, money, and energy was put into alcohol.  It was a relationship for sure–but it was a bad one.

Getting sober has allowed me to redefine my relationship with time.  In the past, I just wanted time to fly by. There were things in my life that I wanted to pass, and I thought alcohol helped me speed up that process.  The more I drank, the more I forgot about my problems.  Unfortunately, that forced passage of time comes at a cost.  I sacrificed so much time.  Hell, at my peak I was spending 5-6 days a week, and 4-8 hours a night in bars.  I dedicated two to three years to that.

Now that I understand how much time it takes a person to become a master of their craft, I can’t help but look back at that period with a bit of regret.  And that’s because I understand that that time would have been so much better invested into something that could have given me something back.  An investment of that that much time into a skill would inevitably resulted in a faster path to mastery.  A faster path towards emotional, intellectual, and financial independence that makes living life much easier.

At the same time, I don’t want to sound as though I totally regret that time because I don’t.

The truth, is that it made me the man that I am today.  I had to go through that to learn the lessons that fuel my life today.  I wake up inspired and knowing I will never drink again simply because I know that I value my time here on earth too much to ever invest it into something that doesn’t give me anything back again. I would rather put that time and energy into my art, my family, and my friendships.  I would rather put it into building a career and platform that can last a lifetime and bring me joy that is longer than the buzz from alcohol could ever be.  Hell, even putting that time into addressing and fixing the issues that caused me to drink so heavily in the first place.

I never thought I would make it four years when I started.  But every year it feels better and better.  The sense of confidence I have gained since I’ve been sober has been incredible.  I no longer use alcohol as a scapegoat for my shortcomings.  And I no longer give it credit for my achievements.  And I’m not sure I would have been able to have those types of honest conversations with myself had I not spend those years drinking like that.

So in reality, it’s hard to not view that time as a gift. But only because I came out on the other side with the proper perspective and focus.  Sometimes we have to go through really tough situations to grow. We can’t learn all of the lessons we need from books, things people tell us, or from living vicariously through others.  Sometimes have to get out there and live.  Get out there and get a little dirty.  And after we get dirty we’ve gotta do the laundry ourselves. We’ve gotta do the dirty work on ourselves that nobody else can do for us.  It’s painful sometimes.  It’s far from flattering. But it makes us better human beings.

And as weird as it sounds to say this, my time as an alcoholic gave me the opportunity to become a better human being that I never would have had otherwise. I was fortunate enough to make it through that time without anything tragic happening to me or anyone else, and for that I am extremely thankful.  But most of all I am thankful for the opportunity that has been given to me to now contribute in a more meaningful and lasting way.  I am thankful for my newfound appreciation of time.