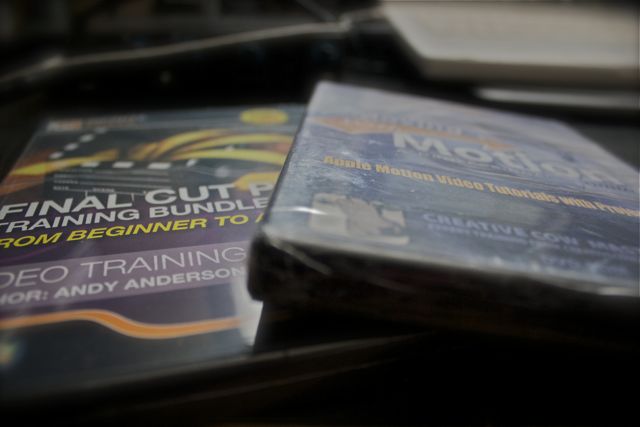 The other day I made a decision I should have made a long time ago. That decision was to order two training DVDs. One is for Final Cut and the other is for Apple Motion. While it is true that I’ve been messing with video production as a hobby for the past few years, I’ve never actually studied the application I edit in.  Like a lot of people, I got a copy of the program from a friend and just hopped right in.  I have read dozens of books on video production and editing philosophy, but always told myself that studying the Final Cut program was something I would get to later.

But along the way something happened that happens to everybody who does something with regularity–I got better at it.  In fact, my natural talent (combined with the time I was able to dedicate to video editing) allowed me to get good enough to get hired for multiple video gigs, even though I consider myself a musician first and foremost. This has recently culminated into a music video I just finished for some friends of mine, which is easily my best work.

Because I knew this music video would be released on a bigger platform, I decided to take a very academic approach for the first time; I went back to square one and started relearning photography concepts like aperture, ISO, and shutter speed. I stayed in the house for a couple of weeks practicing and setting up my living room like a photo shoot. The results were immediate. My images were exponentially better.  For the first time, I actually knew what the hell was going on. In the past, I would feel my way around and rely on instinct, but this time I finally understood what my camera was doing and why it was doing it.  I’ve still got a long way to go, but I’m definitely happy with my recent progress.

It made me realize one thing: I was relying too much on talent, and not skill.

Talent is what allows you to acclimate to new fields and activities quickly. It’s the level you start at when you pick up something new and effects the speed at which you become proficient at it. What we often consider talent is the result of previous experiences at parallel disciplines, or prior knowledge of a thought process that mirrors the new one.

Talent is what allowed me to be good at ping pong the first time I played it.  My friends thought they would roast me because I told them I had never played before, but they completely forgot that I had played three years of varsity tennis in High School.  So even though I had never played ping pong before, the mechanics and experience I had in a parallel area allowed me to quickly acclimate–and kick their asses thoroughly.  In my mind they were two completely different things, but once I started playing I saw I had a distinct advantage over the average ping pong player.

But I could never beat a real ping pong player. Why?  Because I’m still relying on talent and they’ve taken the time to build their skill.

Skill, is not an accident.  It is the result of a deliberate process we undertake to master our craft.  Years and years of practice is what chisels and refines talent into skill.

That’s the difference between talent and skill.

Talent is an entry point, skill is a destination.

I was able to have success with the Final Cut program for three reasons:  I had already played around with iMovie; I understood non-linear editing from the audio realm; and I had read books about editing philosophy. That’s what allowed me to have immediate results, but I had never studied the specific tool I was using (Final Cut) nor sought to master it.

Now I understand how far I can go if I take an academic approach to building my skills.  I have officially began the process of deliberately turning my video editing talent into an expansive and professional skill set.

Sometimes we have to take a step back and question our approach to our respective crafts.

Are we just having fun and relying on our natural talent? Or are we using our given talents as a foundation for building a comprehensive and undeniable skill set?

What additional opportunities would we see if we refined our technical knowledge of our craft? How many hours per week would we need to do achieve that?

Relying on talent can take you to a certain point, but having skill will put you among the best.