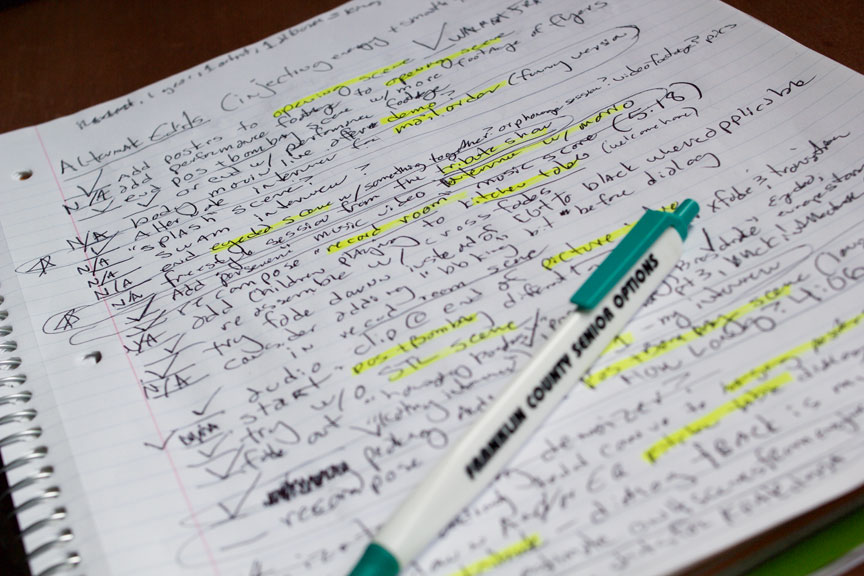 For the last two weeks, I’ve been knee deep in revising my first film King No Crown. Obviously I’ve been gradually revising it throughout the entire process but, as I get closer to the end, the revisions start to get a little more involved and intensive.

The entire process reminds me that while the idea of picking up a camera and shooting a movie is universally exciting, the idea of sitting down and painstakingly revising what you’ve already done is universally boring. Everybody wants to shoot a film and everybody wants to show what they’ve shot to the world, but there’s an incredible amount of work in between shooting and showing that is rarely talked about. And it’s as I operate deeply in this part of the process that I’ve become fully aware of why some people quit and why many projects die on the cutting room floor.

I can’t speak for anybody else but, if I were to estimate, the creative part of shooting this movie has been about 20-25% of it. I expect the promotion and roll out of it will be another 20-25% of it when it’s all said and done. So where is the remaining 50% of time being spent?

And by editing, I don’t necessarily mean time spent strictly sitting down at the computer editing; I mean any time that is spent revising, shaping, and molding what you already have into something better. That could range from studying what you’ve already got hundreds of times to find the holes in it and taking notes, to soliciting feedback from others to find ways you can improve it, to studying the techniques necessary just to make the proper changes correctly. There are levels of this game where people have the financial ability to hire people to do all of this (i.e. a budget). But this film is a no-budget affair for me. I don’t have tens of thousands of dollars to throw at problems and hire people to do everything that needs done. Plus, there is so much value in the lessons that I’m not sure I would pass most of this stuff off anyways.

As a result, many lists are made. I have notebooks full of lists of changes that must be made and ideas for changes. Every day I spend between six and twelve hours trying to whittle down these lists. Some days it goes great. Other days not so great. But I still plug away.

I’m not doing what people consider the “creative” or “fun” part of this process. In fact, if this were a war, what I’m doing right now would be considered trench warfare–the ugliest and most intense part of it.

Creating is dropping bombs from a plane. Editing is sending in ground troops.

This is why it’s so important. Without editing, I have nothing. And by nothing I really mean nothing. All I have is a meaningless, formless, idea. That’s it. A broad idea that I think is cool, but haven’t taken the necessary steps to prove yet. There are plenty of people who only talk about ideas and creativity. It looks good and sounds good. But be weary of people who spend more time talking about ideas than they do the importance executing those ideas properly.

This is why I cannot stress the importance of the edit enough. Even though it is tedious and not very exciting, it is the part of the process that transforms an idea into something tangible. Just as gold must go through fire, our ideas must go through the editing process. Not because it will make them perfect, but because it is the only way to see them at their fullest potential. We owe it to ourselves.

So as far as the King No Crown film goes, even though I’ve got an edit thats about an hour and ten minutes long, I’m in the process of trying to tighten it up. You only get to make your first film once, so I’m embracing this process.

That’s it for this week’s update. I’ll update you all again next week.