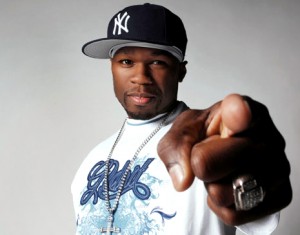 Regardless of how you feel about his albums or his current releases, it goes without saying that 50 cent is a successful artist.  Aside from his obvious knack for beef, he’s always had something about him that stood out amongst his peers, and most of the time that wasn’t even the music he made, most of the time it was his personality.  For years, he’s stirred up just enough controversy, and exposed just enough of his personal life to stay relevant and keep us tuned in.  He does charity work, movies, gives great interviews, and always has a well thought-out strategy for developing his artists.  While the music he’s been making since his debut album has left a lot to be desired, I’ve always thought this cat was pretty entertaining, and pretty much chalked his success up to his personality and story.

But lately I’ve started to admire him for another reason, that has nothing to do with his personality.  The fact of the matter is that 50 cent is a pretty damn smart dude, and his personality is just a function of that intelligence.

I consider myself a pretty good strategist. Not necessarily in it’s application to things around me, but in my understanding of strategy.  I’m a big fan of books like The Art of War and The 48 Laws of Power.  Fortunately, I don’t necessarily need to be too strategic in what I do, I’m more of an artist, but I’d be lying if I said I didn’t admire those who are.  Some people think strategy is all about being diabolical or cutthroat.  And while there is definitely a shallow and hurtful side of being strategic, there is also a side of it that’s pretty damn slick and not hurtful.  50 manages this about as well as anybody in the public eye, particularly at his level where he doesn’t have anybody speaking for him like an athlete or politician.

Now, here’s what I saw today that made me think that and write this.  It’s a series of moves that I initially dismissed as poor planning or shortsightedness on his part, but when I take a step back it’s actually the opposite.  It’s the work of a grand strategist.

First, 50 released a movie last week called Things Fall Apart.  For those that don’t know the title comes from a book by China Achebe.  It’s a classic book.  The title Things Fall Apart was also used by The Roots on one of their best albums.  Now, when I saw that he had a movie coming out called Things Fall Apart, I immediately thought he was making a movie adaptation of the Chinua Achebe book; a book that hasn’t been made into a movie yet, but anybody who’s read it would be excited about.  I soon found out that it wasn’t based on the book, it was an original screenplay that 50 wrote about a college athlete who…blah blah blah.  What it’s actually about doesn’t matter as much as the fact that it’s not in reference to the book.

So what’s so smart about that?  Well, first of all, everybody whose read the book and sees his name associated with it will instantly read more.  I can attest to this because he fooled me.  I was disappointed at first.  Then it made me think about reading the book again.  Then I was salty that 50 took the title.  But what’s more important than all my feelings is the fact that it made me internalize the fact that 50 cent has a new movie out.  Smart.  Whether his new movie is good or bad (probably bad), I know its out.  What I thought was simply an oversight on his behalf, and not being informed, was really a smart play on his behalf.  He got me.

Then you add another layer to that because there are a lot of people who are fans of the Roots, but don’t know that the title Things Fall Apart is from a classic book.  All these people probably did the exact same thing I did.  They wondered why 50 is using The Roots album title.  Then thought about how much they loved The Roots.  Then got confused.  Then upset.  Then internalized the fact that 50 cent has a new movie out.  Smart.  The definition of strategy.

Now, this is the part that is the most impressive that I’m sure he will never admit to.  He released a mixtape today that he’s been pumping up on twitter for the past couple weeks called The Big Ten.  I downloaded it, which in itself proves that he’s onto something, because I heard about it trying to get info on his movie.  And here’s what’s slick about his mixtape:

#1 – the tracklisting is completely fucked up.

#2 – the sound quality is shitty

#3 – there’s an annoying “mixtapes.org” drop over all the songs that sounds really out of place.

Now, the average person might think these are just random things, but at this point I’m starting to put things together, so each of these things really jumps out to me.  Why would the tracklisting, and sound quality be shitty when you got it directly from an artist? Why would there be an annoying drop on there from a site that didn’t even have exclusive right to the mixtape?

Because every one of those seemingly little things are going to make people talk about it more, and 50 knows that in this era of disposable music and releases that people rave about one minute and forget about the next, extending your 15-minutes of fame is pretty important, even if you have to resort to confusion to do it.  Chaos is attention, and 50 is a master of it.

Now, the obvious problem in all this is that if the tape sucks then nobody is gonna care enough to ask questions.  But I’m guessing that 50 didn’t put it out make any artistic mark, he put it out just so people would talk about 50 cent, and I think he’s going to be successful at that.  The fact that I’m writing this is proof of that.

I’m the most curious about what happens when the talk finally gets to the music, because ultimately all the strategy in the world doesn’t work if your music sucks.

Now, please understand, I’m not writing this to suggest you go buy his record or even download his mixtape.  I like 50 but haven’t bought any of his music since his debut album.  I’m writing it more to try to point out and maybe open some discussion about his use strategy and see what you all thought about it.  It’s entirely possible that I may be reading too much into it, but I think suggesting so would be to imply that he go where he’s at by being in the right place at the right time, and not because he is a pretty calculated dude.

So here’s my question: