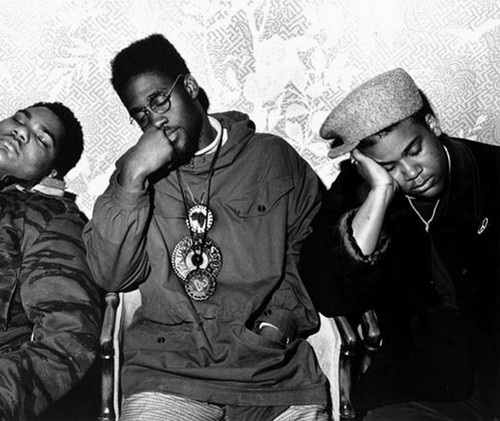 Today was the 25th anniversary of De La Soul’s classic debut album, 3 Feet High and Rising. I’ve owned the album, on cassette mind you, since it was released and definitely view it as one of the most influential albums of all time.  From the selection of bugged out samples; to the invention of skits; to the “every-other-bar” rhyme patterns–De La Soul was eclectic and innovative. To top it off, they were arguably the first hip-hop group to make it ok to be a little…weird. Their landmark single “Me, Myself, and I” epitomized how comfortable they were being themselves and not participating in the gold chain infested hip-hop look that their contemporaries were promoting at the time.  Needless to say, 3 Feet High and Rising took off.

So naturally, the 25th anniversary of their debut should mean something to hip-hop fans everywhere. A purist would probably say you shouldn’t even be allowed to call yourself a “real hip-hop fan” if you haven’t heard that album, but that’s another discussion altogether.

What’s important, is to realize that today is probably the biggest day of recognition we have ever seen online for De La Soul.  Every single music publication is writing about them. Mainstream outlets like NPR is covering them; large traditional hip-hop outlets like hiphopdx.com is covering them.  Hell, I’ve even seen De La Soul listed on the trending topics on my facebook feed today, so you know they’re buzzing.  I can’t remember the last time any “old school” hip-hop artist has ever achieved that level of exposure and buzz (aside from being shot or getting caught doing something inappropriate).

But the interesting part is that their buzz isn’t about 3 Feet High and Rising being 25 years old today.  It’s about them releasing their entire discography for free today.  That’s right, De La Soul has decided to give away pretty much all of their albums today, for no cost to fans.  The deal is supposed to last for 25 hours to commemorate the 25 years since their debut.

When I saw this plan my first thought was “Wow…I’m kind of shocked that those major labels would let them do this. I’ve never heard of any major label allowing any of their music to be given away, 25 year anniversary or not.”  I didn’t think anything else of it and got on twitter.  There I saw even more buzz about De La Soul giving away all their albums.  When I mentioned it, several of my followers said they had taken advantage of it and downloaded their entire catalog.   Then I saw another person mention that the albums they downloaded weren’t directly from the labels, they were encoded and ripped from filesharing and torrent sites and still had all the incorrect tags on them.

That’s when it hit me:  De La Soul had just hijacked the music industry.

You see, if the files they’re making free to the public weren’t from the labels themselves, then De La Soul didn’t get permission from the major labels and rights owners. It basically means De La Soul decided to make their music free themselves.  Then they created a publicity campaign around it that tied it into the 25th anniversary of their debut.  Next thing you know, De La Soul is a trending topic on facebook and prominently featured on every single music publication there is.  Within 24 hours they’ll be forced to take the music down via a cease and desist, but by then they’ll have achieved their plan.

Now that’s what I call a jack move.

When was the last time you saw an old school hip-hop group get this much attention?

Better yet, ask yourself when was the last time YOU bought a De La Soul album?

Even for people like me, who consider themselves a true fan of the group, that would be a long time.  I think the last album I bought from them was Grind Date, and even that came out ten years ago. I know the words to almost all of their albums, but even I’ve been sleeping.

But here’s the thing: De La Soul knows this.  They know that having respect and being a legend doesn’t mean shit if people aren’t buying your records or talking about you.  And in an age where music is basically free for anybody who wants it, attention is currency.   They also know that none of the owners of their catalog would ever care enough about reenergizing their legacy to do something like this.  Hell, I’m sure it could be argued that the people who own their catalog don’t really care about De La Soul at all at this point.

And that, my friends, is why De La Soul won today.  They just managed to disrupt the music industry just like they did 25 years ago, using the tools of today. And they’ve got the music to back it up.

Many will argue that what they did was foolish and that it devalued their catalog. But again I ask you, when was the last time YOU bought a De La Soul album?  What they just did–which I’m sure got at least hundreds of thousands of downloads, if not millions–will do more for their career and catalog than anything any major label could ever do for them.

The people who missed out on getting their back catalog today will feel nostalgic and want to listen to more De La Soul.

The people who downloaded their catalog will be reminded of how amazing they are and start coming out to shows.

More people talking about them will mean more people in attendance and more money from shows.

And the people who come out to shows will buy more merchandise (t-shirts, etc.).

Pretty good for an old-school hip-hop act whose back catalog probably wasn’t even available in physical format in the first place, right?  The bottom line is that it will force all of us to put their careers and achievements into perspective; something that should have been done a long time ago.

By the time they remove the download links De La Soul will have pulled one of the biggest single day jack moves the industry has seen, especially for an old school act.  Some people will argue that they were foolish. I think it’s a brilliant move that has injected life into their careers.