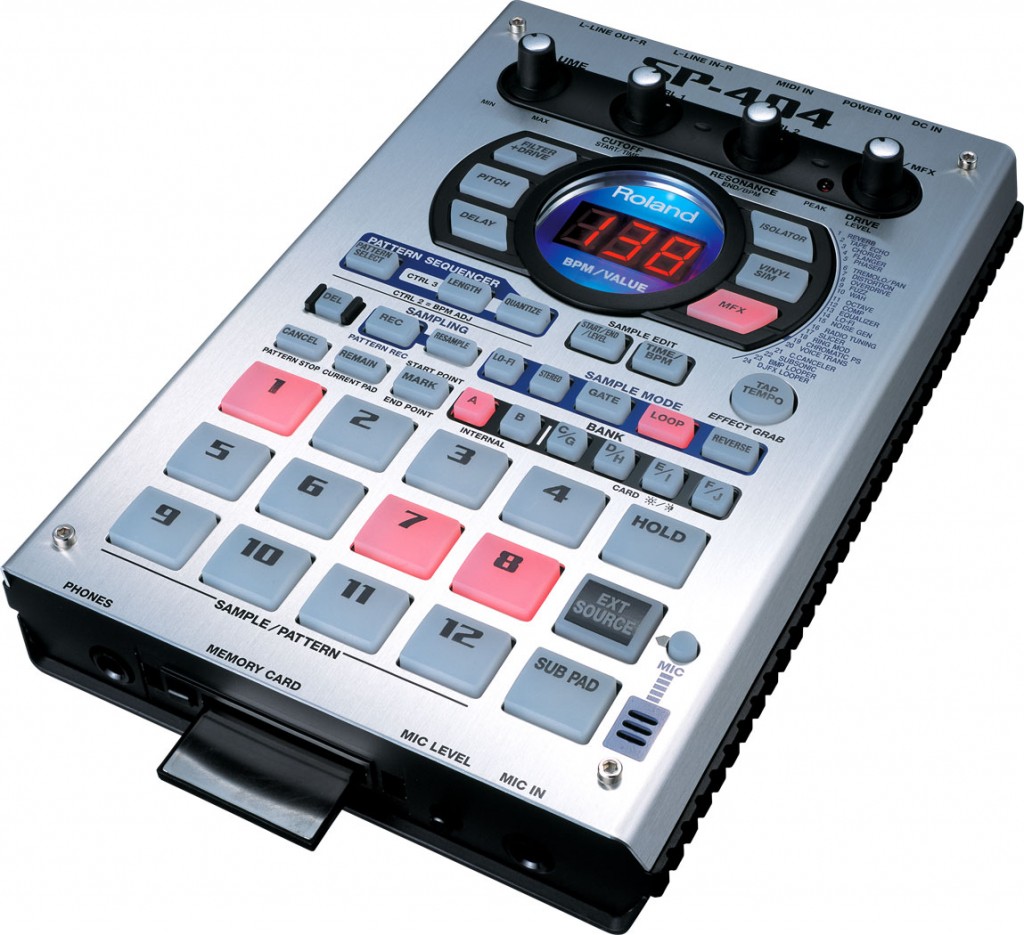 About a year ago, I was trying to find an alternate way to trigger samples on stage. Although I usually have a laptop and midi controller on stage with me anyway, I wanted to use something different and smaller.  A few people suggested I look into the SP-404, so I started researching its features and specs online. I was really close to buying one but decided to hold off at the last minute because it was in that price range that makes you think about it (i.e. $250 and up).

A few weeks later, I went over my guy DJ Detox’s house for some rehearsals before we went on the road to do some shows.  In addition to being a DJ, he also does beats.  And just like most beat-makers he has a decent amount of production gear. Neither of us are gear junkies, but he’s got about as much gear as I have.  We started talking about new gear we wanted and he mentioned that he had the Akai MPK-24 midi controller but really wanted to try the Akai MPD-32 midi controller.

I instantly remembered I had an Akai MPD-32 at home, collecting dust.  I had bought it a year previously and it didn’t fit my workflow at the time.

As I looked around Detox’s lab I saw an SP-404 sitting on the shelf collecting dust.  I asked him did it work and he said it worked fine but that he didn’t use it anymore.

We decided to swap gear: I would borrow his SP-404 and he would borrow my Akai MPD-32.  We decided to take a few weeks and see if we liked the machines.  I spent the better part of the next two weeks trying to learn the SP-404 well enough to see if it would fit my needs.  From youtube tutorials, to reading the manual, to spending an hour a day with the machine–I did it all.

Unfortunately, I realized that the SP-404 was a terrible choice in regard to what I was looking for. In fact, learning how it actually worked made me hate it.  I admire the cats out there making amazing music with it, but I found the features (or lack thereof) incredibly frustrating.  After spending two weeks learning it, my initial feeling was that I had wasted a lot of time for nothing.

But you know what?  It didn’t cost me a dime.  The truth was that being able to borrow his machine for two weeks allowed me to save around $300. I got to really learn a machine that I had only heard about and seen online for free.  No matter how you slice it, that’s a come up.

And that, my friends, is how you try out new gear without buying it.

Given the insane amount of options out there, it’s so easy for a beat-maker to make unnecessary purchases and become a gear junkie.  Especially when owning a new piece of gear is just a mouse-click away.  But I would bet most producers have at least one unused piece of gear in their studio that another producer would love to test drive.  It creates a situation where you can check out new gear without spending any money at all.  I know this is not a radical concept to anybody who hangs out with a lot of producers, but I still wanted to share.  I figure if I overlooked it, then it’s likely others may have overlooked it too.

Before you spend money on something new, ask around.  Talk to all your friends who do beats and see what gear they’ve got.  You’ll be surprised how often they’ll be sitting on an item you’ve been curious about.   Use it as an opportunity to learn and try new gear at no cost.  And if you end up liking it, they might sell it to you at a fraction of the cost you were going to pay elsewhere since they weren’t using it.

Just I wanted to share this tip to all my beat-makers out there.