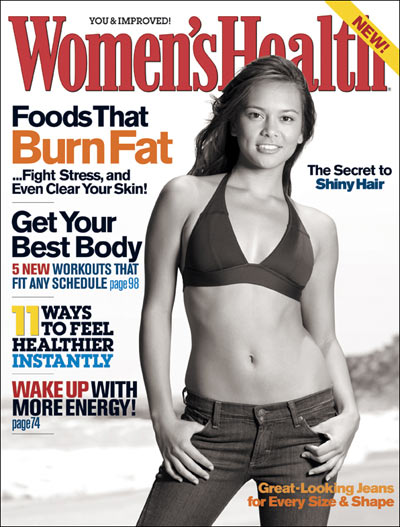 So I’m at this dinner party tonight, drinking wine and eating some amazing food, and while the food is cooking I pick up a magazine on the dinner table; Women’s Health magazine. I figured it couldn’t hurt to kill some time while we were waiting on the next course to be served.

So as i’m reading this magazine to myself, i instantly realize that some (if not most) of the articles in it are actually pretty funny if you read them out loud. So for a while i was reading them out loud and we were cracking jokes about it.

See, when i was younger i used to sometimes read women’s magazines in my search to learn more about what women write and think when men aren’t around, you know? It’s like locker room talk for men, where we get to see what they really think about us. Probably the same reason I was always a fan of Sex & The City. So none of that shit was new to me. I actually find that magazine as well as other magazines like Cosmo extremely entertaining on some bugged-out shit. You just have to not take them so seriously and they’re pretty damn funny.

So as I’m flipping through this magazine the craziest thought occurs to me, that i will get to a little later, but peep this.

Here are some titles of a few articles in it and some direct quotes:

The entire article goes on to explain such cutting edge concepts as defraging your harddrive, backing up your harddrive, “3 amazing tivo tricks”, and the ever important “buttons you never press but should!”

The illest quote in the entire article is “the answer to lots of tech problems: reboot“. Really? Wow.

CAN HE READ YOU? Get Your guy to match the face with the feeling“Whether you’re at a family dinner or an office bash, being able to wordlessly commmunicate with your guy is crucial to surviving the stressful holiday season. But does he really know how to decode your facial cues? If he cant tell the difference between “Let’s Stay Longer” and “get me the hell out of here”, pass him this page–pronto“

15 MOMENTS THAT DEFINE A RELATIONSHIP
This almost seems like an interesting concept, but its the most ridiculous shit I’ve ever heard. Here’s a couple of ground-breaking “moments” that define a relationship:

The First Kiss
The First Morning After
Finding the nerve to say “i love you”
The First time he lets you control his car/remote/ipod (WTF?)
When you notice yourself no longer primping for him.

I promise I’m not making this shit up, but think about this quote from an article titled “Male Brain Explained”:

“Get Inside His Head – New research shows that when it comes to emotions, men and women really are wired differently”

Really? There’s scientific data that really proves men and women are different? My mind is completely blown…after all these years of thinking we were on the same shit, my brain is about to explode. And since you’ve got scientific data it must be true, right?

Now, I know yall are gonna think I’m crazy for this shit right here, but here’s my theory:

After reading this magazine, i truly believe that it is written by men–not women.

Stay with me here.

I think that if you visited their headquarters all you would find is an empty factory with a bunch of dudes, sitting around smoking cigarettes, smoking weed, drinking beer, and writing shit that sounds girly and insulting to women just for kicks and to make money. I truly believe that there is no way a single woman works for this magazine. No way.

Let that marinate. Then go back and read the magazine and I promise you will feel me on this.

The shit in this magazine is so insulting to the intelligence of women in general that there’s no way a woman could be writing it, let alone a building full of women. If women actually wrote it, they might actually think that the implication that technology “scares them” is insulting, or that taking time to try to train your man to read your non-verbal cues defeats the entire purpose of communicating in the first place. They might actually find it insulting that somebody wrote 500 words dedicated to the fact that men and women are “wired differently” when we all know this is obvious without scientific data to back it up.

Hell, I would even go so far as to say that magazines like Women’s Health are more damaging to women than all the really blatantly “boys will be boys” magazines like Stuff, Blender, FHM, and shit like that because at least those magazines don’t present themselves as anything other than what they are–excuses for dudes to talk about dude shit and look at hot chicks. It’s a wolf, you know it’s a wolf. Whereas Women’s Health actually looks like a sheep but is really a wolf, feel me?

Marinate on that shit for a second…let me know if you feel me on this.