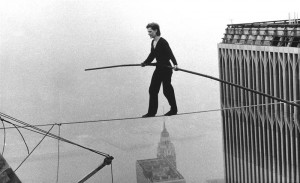 I often get asked by friends and fans if I get nervous before I get on stage, and my answer for the past 10 years has always been “no.”   When I say I don’t get nervous most people think it’s because I’ve got nerves of steel or that my confidence is just so high that I can’t be shaken by being in front of unfamiliar crowds, but the truth is a little more complicated than that.

Early in my career, I wasn’t nervous because I was too nieve to be nervous.  I was playing shows in my city but hadn’t really left yet and could still count on knowing the majority of the faces in the crowd.  Shows were social events more than shows back then and it was easy to be comfortable.  At that point being nervous about performing would’ve meant that I actually understood the long term scope of what I had gotten myself into, and that I wasn’t just out there having fun.  It was easy to be comfortable when you don’t know how bad things could go, and what you could lose in terms of fan support by doing really bad shows.  Truth be told, if i would’ve actually understood things a bit more at this stage I probably would’ve been nervous enough to piss my pants.  Everybody goes thru this stage.

The second stage was when I started doing shows outside my city and touring, playing in front of unfamiliar crowds all the time.  This has been the longest phase of my career, and  the one with the highest level of anxiety attached to it because it’s when I actually started to understand the importance of putting on a good show and what I had gotten myself into.  I was actually very nervous when I started this part of my career but I used alcohol to mask that nervousness for many years.  The anxiety was gone, but the thrill of being alive that nervousness brings was gone as well because the alcohol made me just emotionally detached enough to not be nervous.  Once you’re drunk you don’t really give a fuck what people think and who’s looking at you.

In February of 2011, two months before the release of Adventures in Counter-Culture, I went to Florida for a week of shows so we could try out the new stage show and material before the album came out.  For the first time in six years everything about my stage show was new; from the addition of my guy Bobby Silver on bass, to DJ Rare Groove now doing way more turntablism, to me playing keys and using an effects pedal on stage.  We were playing all new songs that we hadn’t even figured out yet, and everything was new.  We had practiced a lot, but there were more variables in our set than ever, and we all knew that anything could go wrong at any time.

All the sudden, for the first time in almost ten years I was nervous again.  And you know what?  It wasn’t so bad.  I could see just how drinking heavily made me risk adverse.  My stage show went from being a function of what I could actually do, to a function of things that I had to be able to do black-out drunk.  This made me simplify things over the years.  My rationale was that the only thing worse than being drunk is being drunk and trying to do something really difficult in front of a bunch of strangers, but that was just me being safe.

It’s funny how things change, because this time I didn’t have alcohol to numb the nervousness, so I had to roll with it and use that energy in a constructive way.  The result was that I felt more alive than ever.  I’ve had to revisit my own personal beliefs about what being nervous really means.  Before I used to think it it meant you were weak or afraid, but now I don’t believe that anymore.  I think that feeling nervous is a sign that we’re actually living life to the fullest and are completely alive.  You know who doesn’t feel nervous?  People who do the same thing every day.  People who don’t take chances.  People who are too afraid to try new things.  Now I believe that the people who never feel nervous never feel anything at all, and that they’re just as numb and risk adverse as I was when I was drinking heavily.   They never feel nervous because they never actually put themselves in unfamiliar situations or challenge themselves, and that is more a sign of fear and weakness than being nervous could ever be.

Being nervous is good for you.  If you’re able to do something in life that makes you feel nervous, then that means you’re not being safe anymore and you’re putting yourself on the path to new experiences.  Don’t be afraid of that feeling, embrace it and use its energy to propel you into new directions and experiences.