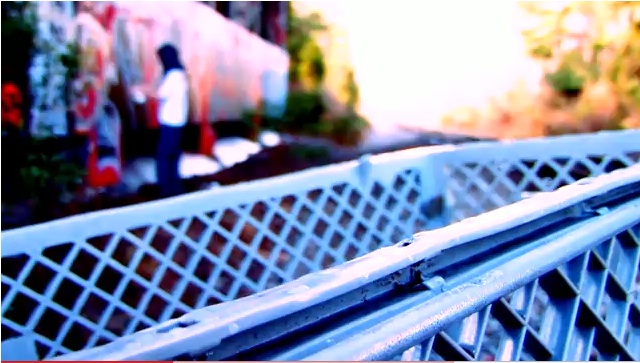 As my curiosity about the field of film & video increases, I find myself crossing paths with people are are really good at what they do. I love to chop it up with people about their craft, especially those far more advanced with me, soI thought it could be cool to feature these conversations about Film & Video here on printmatic.net and call it Behind the Camera.

Well this first feature is on film student Cory Ring.  I found Cory through his fan-made video he made for a song of mine called “6 a.m” (from the Sign Language EP – buy it if you haven’t yet) and “Big Time” from the Latimore Platz Smokey Part Two EP.   There are a lot of fan-made videos out there, and I’m not exaggerating when I say that this might be the best one I’ve ever seen, and that it’s a huge compliment that my music was able to inspire such a creation.  Once I saw it I knew I had to interview Cory.

Check out the video:

Read the full interview with Cory here after the jump:

BLUEPRINT: First of all would like to thank you for using our music in your video. I’ve seen a lot of fan-made videos out there and yours is by far the best I’ve seen. I’m actually not even sure calling it a fan-made video does it justice because it seems like much more than that. To me, it’s more of a piece about your city, art, and you showing us the beautiful things that are right underneath our noses that are often missed. Our music just happens to fit the mood perfectly. I could be wrong though. How would you describe what you were trying to achieve in the piece?

CORY RING: Basically I wanted to create a piece that combines imagery with a powerful musical track, hoping to end up with a product that could affect the viewer on a visceral level. 6 AM can definitely be described as an emotional track, and I wanted to capture the almost other worldly tone that it provides within the video.

If I were to look for some meaning of this piece I would have to say that I wanted to provide reminder for all those willing eyes and ears that life can be bitter depending on how you look at it, but in fact, we can find beauty in anything. I don’t know. I just walk around and film shit that inspires me. I want to share that inspiration, because people need to be inspired There seems as though there is a lack of passion out there in the world for what life is; for how short life is.

The city can act as a symbol of the “American life style”, a central ground for the crowded busy, and restless lifestyle we seem to crave. When you stop sucking on society’s tit for every drop you can get from it, and try to scope out some escape from it, you will inevitably start to think for yourself and a whole new world will open up for you, where you will truly act for yourself.

I don’t know what others feel, but I hope gain a sense that I have escaped this grim systemized reality at times; enjoy life, make people laugh, and flourish from observing and experiencing.

BLUEPRINT: As far as the visuals go, which came first: did the music inspire the visual approach you took, or did you already have a visuals in mind but were waiting on the right music to accompany it?

CR: Actually, the first thing that got the idea rolling was the beautiful monologue provided by Charlie Chaplin in the film The Great Dictator. That shit possessed me. I mean, the more I listened to it, the more visuals and emotions were being thrown around in my head. So I gathered footage and gathered more footage, until I thought I had enough to make some moves in the editing room. I had a tough time picking music, and actually had to start over a number of times because of that Ended up finding “6 AM” on you tube, and knew immediately that it was what I needed. So I bought Sign Language, put it in the timeline, and boom it was perfect.

Because I had a ton of footage, and the song was at a slow tempo, it didn’t leave much room for quick cuts. I remembered hearing “Big Time” by Platz and thought it was perfect to use with various quick shots. So I ended up using the two tracks together, starting out with a fast paced montage of visuals, and ending with a calm sequence, that enabled some moments to take in the visuals more.

BLUEPRINT: The first thing that jumps out to me about the video is the actual shot composition; pretty much every shot in the video could be a still photograph, which is clearly the work of somebody that understands the art of photography. what’s your background and experience in photography?

CORY RING: Well, my mother is a freelance photographer, and used to be a photojournalist. She established my fascination with it at a young age, but it wasn’t until my junior year of high school that I was formally trained in black and white film photography. If I was skipping a class, it would be to go to photo and chill in the dark room. I try to be consistent in shooting film, as it is unfortunately a dying breed.

BLUEPRINT: Did you go to school for film and video production or are you self-taught?

CORY RING: I started out filming skateboarding with buddies freshman year of high school, watching other skate videos, getting ideas of what looks good and what looks bad. There were (and still are) a lot of kids producing skateboard montages as well as full-length videos coming out of Charlotte and surrounding cities in North Carolina; so those provided as some form of education, and inspiration. After high school I enrolled at University of North Carolina School of the Arts and am now a sophomore studying cinematography and editing.

BLUEPRINT: What kind of camera did you shoot with?

BLUEPRINT: What software do you use to edit?

BLUEPRINT: The colors are another really strong part of the video. What’s your approach in terms of color and your philosophy for color correction? Do you just do what you feel, or do you have formal training?

CORY RING: Color correction is sexy. I havent had any training, but all it takes is practice. I just throw the 3-way color corrector and RGB balance filters onto a clip in FCP and tweak it until it looks pleasing. For this kind of clip, I think the color was appropriate. But, sometimes it may be better to go for more realistic colorization, depending on the project. (*Brings down the Blacks and Bring up the Whites. A picture/ video usually looks more appealing with some contrast and rich dark colors)

BLUEPRINT: I love the graffiti theme throughout the video. Are you a writer yourself or are those friends of yours?

CORY RING: They are just friends of mine. I don’t write, but I hope to pick it up one day. But the lifestyle fascinates me. Just cats that wander into the depths of urban landscapes. Graffiti artists are outsiders, the black sheep of a community, where risk, exploration, and expression are a part of their everyday preferred lifestyle.

BLUEPRINT: A lot of the spots in the video seem almost off the beaten path for a regular person, but the perfect spots that only those that write would really know about. Was it a conscious decision to show some of those more low-key spots, or did you just go with the flow and capture whatever was around you at the time?

CORY RING: Shit, I exist on the beaten path. I grew up on that shit. The abandoned warehouses, cracked overgrown concrete slabs that were once foundations for buildings, the drainage ditches, etc. they all provided me and my peoples the perfect skate spot to chill and build stuff on without the nagging of security guards or cops that take your board and hand you a $100 ticket; the roof of the old factories on the outskirts of uptown that provided us with a perfect afternoon adventure as teens. It was a conscious decision, but also a convenient decision, as it is purely documentation of the places friends and I choose to inhabit and use as an escape, whether it’s painting, skating, exploring, etc.

BLUEPRINT: The shot of the train moving by that transitions into the flag waving in the wind around the 1:40 mark is really beautiful. What was the process that brought those two things together?

CORY RING: From a technical standpoint: I changed the composite mode of the flag clip to hardlight, and overlayed it over the cut between the clip of the train and the clip of the guy tying the shirt around his head.

From a conceptual standpoint: establishes a setting as well as irony, glorifying the lifestyle captured

BLUEPRINT: I’m also impressed with how steady the shots are throughout the video. Did you go hand-held or did you use something for stabilization?

CORY RING: Most of the shots are handheld, using my legs or rotating my hips to create camera movement. I also used a tripod, which can be used in many ways, even a steady cam. One example of this is the shot in which the camera booms down bringing the shopping cart into frame as the subject paints in the background. For this, I simply rotated the lever that lowers the head of the tripod steadily. Another shot I used the tripod with was when the camera seems to emerge from behind the wall, revealing the subject painting, and then seems to rotate towards the ground. For this shot, I extended two of the tripod legs and left the third one up. This allowed me to pivot the whole tripod on those two legs giving the illusion that the camera was strapped to the hand on a clock if that makes sense. The shot of the power line, rotating as the camera passes under it, was shot while I was using the tripod as a steady cam. I held the tripod in front of me, parallel to the ground, while I walked as steady as I could.

BLUEPRINT: Have you done any other music videos?

CORY RING: I’ve done many skateboard montages to music, but only one in which the artist is featured in the video. This was my first video that concentrated solely on combining music and distinct visuals (rather than skateboarding). http://www.youtube.com/watch?v=5rg8MYKg1J8 music video

BLUEPRINT: Is there anywhere on-line that people find more of your work?

I would like to thank Cory for taking time out to do this interview. Please take a look at some of his work.  Be on the lookout for more interviews in the Behind the Camera series.