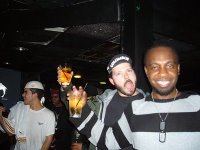 There’s a hip-hop term called “studio rappers”. Somebody is a studio rapper if the stuff they rap about in the studio isn’t what they do in real life. Mostly this refers to rappers who talk about how many people they shoot, and the amounts of drugs they sell, when in reality they don’t do any of that shit.

I always liked this term.

Last night as i was walking home from this show and party at like 6am in the morning when the sun was up, i realized that there is a completely different studio rapper out there that has yet to be exposed; the studio rapper that talks about partying, getting girls, and how wild their life is on record but doesn’t do any of that shit.

We need to rid hip-hop of these people immediately, because they might be worse for hip-hop than the studio gangster.

So as i walked home drunk i said to myself “Al, you really do this shit for real. If you say you’re going to be out partying and dancing and drinking, then that’s what you actually do.” What i’m saying is that I am NOT a studio party-er; i party for real. I like people. I like parties. I like drinking, and dancing. All that shit.

Here is the problem…there are rappers who talk about that shit on record but don’t do it. They go home right after they get off stage. They really don’t drink but talk about being drunk or high all the time. This creates a couple problems for the world; first is that when you (i.e. fans/supporters) meet them after hearing their records, they are boring and usually anti-social. This is because they truly are anti-social and boring, not because you as the fan are making them uncomfortable by trying to have a conversation with them at said social event.

The second, and most important problem is that the records they make about partying and going hard lacks perspective. It’s not grounded with reality. They will tell you about how much they drink when they’re depressed, or how many girls they get every night, but they wont tell you the reality of those situations and how fucked up they can be for everybody involved.

That is why they need to be stopped. So i need all of you to really look around, and identify studio party-ers in your life. Sometimes they can be hard to spot and sometimes they’re NOT even rappers, but if you pay attention to their actions they will make themselves known. You may have been dismissing them as “flakey” for years because they always back out of shit at the last minute, or because they never show up when they say they are. Or they show up when the party is over, or they wanna talk you into leaving said party when its at its apex–even though they talked all week about how much they needed to party and release.

Watch them, they are very slippery.