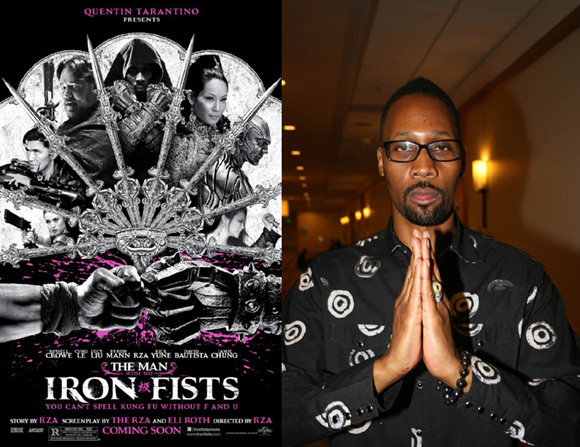 One of the movies I was heavily anticipating this fall was The Man With The Iron Fists by The RZA.  Being a huge fan of his work with the Wu-Tang Clan as well as his books, I’m about as big a fan of The RZA as it gets.  His love for classic martial arts films and their history is well documented and makes him the kind of person you want to see making them.

Unfortunately, I was on tour when it came out and couldn’t make it to theaters the weekend it was released.  I started trying to find it in movie theaters when I got home in December, but couldn’t find it playing anywhere.  I guess that was to be expected since it wasn’t a huge blockbuster film, but I knew it was popular because on twitter Rza tweeted that he was “happy there was so much interest in the movie but unhappy that it was the number one bootlegged movie in america that month.”

I got busy with other things and forgot about it for a while until this week when I tried to find it again on Netflix.  No luck. The only place you can get it is on Amazon and as far as I know that’s just to buy the movie, not to view it.

Now, I fully understand that hollywood has a way of “windowing” their releases through movie theaters, video stores, and then to cable networks that allows them to maximize their profits and extend the life of a movie.  I also understand that this system has been in place forever and they make a lot of money with it.

I can’t help but think that they’re missing out on a lot of sales by not accepting the reality of todays marketplace. What if I don’t want to ever go to Blockbuster video again? What if I don’t have cable? I work from home and spend a lot of my time on-line, so it makes sense that I would want to experience it in the forum where I spend the majority of my time.  Why am I not allowed easier access to the movie?  The options should be go online to either view it or download it, but the current options are to either download it…or download it.  If the Rza himself said that his movie is being severely pirated that should be cause for alarm.  It means that hundreds of thousands (if not millions) of people are downloading his movie – not because they’re immoral or dont want to pay – but because there’s a problem with access.  While I understand that you can’t build your business model around the actions of those that don’t buy your product (I am a musician after all), you have to have a way to prevent large sections of paying customers from feeling left out. Never turn paying customers into pirates. Increased access is the key to reducing piracy.

If this story sounds familiar it’s because the film and movie industries have very similar business models and are faced with many of the same challenges.  Yet, neither has been swift to embrace the coming changes in distribution and access that are needed to close the gaps that exist. The mistakes the music industry made with Napster are being repeated by the film industry with Netflix.  Instead of embracing the digital distribution model that’s right in their face, they would rather raise prices and become more restrictive with their titles.

People just want things to be easy.  I’m inclined to believe that most people will choose easy access to something they have to pay for over actively searching for something that is free, especially if the paid version delivers an enhanced experience.  You will never see an end to piracy, but I have a hard time believing that pushing paying fans towards it is a good strategy.  I know there are a lot of nuances involved, but the building blocks are there to make it work for everybody involved.

I’m not sure how this thing is going to play out, but I think the music industry is a good case study.  I wouldn’t be surprised if ten years from now we’re talking about how the bottom fell out of the movie industry and they suffered the same fate as the music industry.