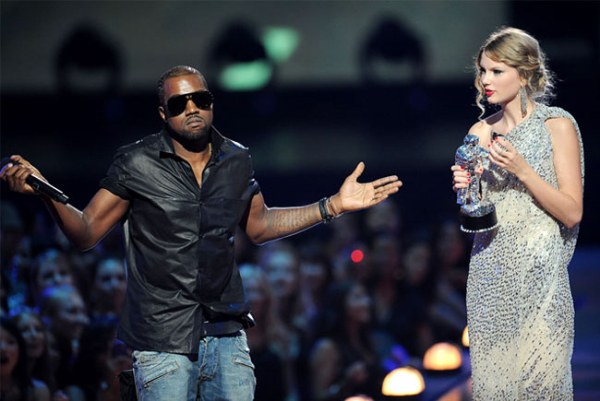 Ok. By now everybody has seen all the shit about Kanye’s antics at the MTV awards show.  Some people are saying fuck Kanye, and they’ll never buy his records again. Other people are saying that it was all entertainment and think it was scripted.  Myself, I think Kanye is easily the most entertaining and polarizing figure in music right now, hands down.  He is to this generation of hip-hop listeners and press what KRS-ONE was to the generation before that; a figure so immensely talented, yet so willing to say and do bizarre ass shit all the time based on whatever their ego was feeling that day.  They’re not driven by money, or fame, or any of that shit; Kanye West, just like KRS is pretty much about whatever satisfies his ever-growing ego.  But that’s another topic that I’m sure is up to debate.

But I’m writing this not to talk about that, but to talk about how yall lost and how MTV won.  I’m sure you’re thinking “what are you talkin about print? how can i lose when i never played?”. well let me school you on how you lost youngin, because some of the best loses have come from people who didn’t even know they were on the field to begin with.

Here’s how you lost:

#1. If you ever looked it it like its Kanye West vs Taylor Swift, you lost

When this went down, everybody is up in arms about Kanye and how he hurt the poor little girl by interrupting her little speech.  “She’s only 18!”,  “Kanye’s a dick!”.  MTV and the media immediately framed it like its kanye vs her. Hip-hop vs country.  Young innocent white chick vs the intimidating,ego-centric, black male! oh no!! but if you look closer you will see that this isn’t the case. But if you ever did feel like that, you lost.

#2. If you even watched the MTV VMAs, you lost

Reality shows, yes. Dating shows, yes.  Ignorant dumb ass programming, yes. But Music Videos, nah bruh, MTV doesn’t do that anymore.  So the entire concept of tuning into a station giving awards out for some shit it only shows for one hr a day at 6am when nobody is awake is a fucking JOKE.  You lost by even tuning in, unless you acknowledged this fact beforehand of course.

You see, MTV figured out a long time ago that they could cut out the music, and just give yall the ignorant shit y’all wanna see like The Real World and Flavor of Love (sorry flav but its true). And instead of saying “hey man, i really wanna watch some artists and music videos because i like music and wanna know whats new and fresh…so i’m gonna not watch them because they’re not showing it.” yall continue to tune in.  And to even consider them as a credible source for music at this point makes you part of the problem.

#3 – If you dont remember that this happened before, you lost

Kanye did the same thing to Justice at the MTV VMAs in europe. ratings went through the roof.  So do you for a hot second think that these people didn’t make a mental note of this and want to leave the door open for it to happen again? Come on people.  In Europe Timbaland gave him the mic.  Over here, “Kanye West – recording artist” flashed on the screen right before he started talking.  Shit is not a coincidence.

On some real shit, i think Kanye is the only person that actually sees that this entire thing is bullshit and is willing to call it bullshit. Every other artist there is trying to protect their legitimacy by riding for the authenticity of the event. why? because if they actually call the VMAs some bullshit, or not show up, they they risk their video not getting played or not being on TRL (is TRL even on anymore?). Yet, Kanye, of all the artists, was the one guy to say “i dont care what yall say, this shit is bogus”, with no fear of the repercussions?  You gotta really think about how deep that is.  And not only has he done it once, but he’s done it TWICE.

Arrogant-ass Kanye, when every other “conscious” rapper was tight-mouthed about Katrina, he was THE ONLY rapper to say something and speak from the heart about it, and call out the Bush administration for their handling of it.  This is a rapper who admits hes got a big head and is in his own world and superficial as fuck, yet he’s the only one who speaks up? Wow.

If you dont see this fact, then you lost.

#5.  If you don’t see that this shit was all about ratings, you lost

MTV has been around for decades. They have seen many stars come and go.  They have made stars and at the same time have caused stars to fade.  Do you not think that they dont look at Kanye this way?  They know that the social appetite for any artist is limited. But they also know that they need the Kanye’s of the world at their event to legitimize them.  So do you think for a second that they wouldn’t throw him under the bus to keep people talking about their event?  Now I’m not saying kanye was right, please understand that.  He is arrogant and that shit was rude, point blank.  But what I am saying is that if you dont see that MTV manipulated the situation to get their ratings up, and exploit Kanye’s ego to their gain then you fucking lost.

I’m sure Jay Z and Alicia Keys rehearsed their performance 20x in that room, yet when they were doing their song Lil Mamma (who the fuck is this chick anyways?) just magically appears on stage? Hmmm.. Come on now. This shit is all a fucking setup to play on our (i.e. the hip-hop generations) thirst for drama.  And as soon as we tune into this shit, we fucking lost.

Its no strange coincidence that a channel that shows reality shows almost all day, decides to make their Video Music Awards show like a reality show, huh?