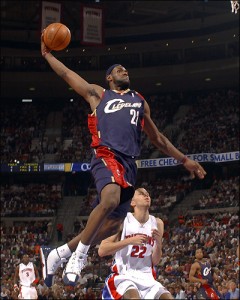 Being an Ohioan, I would often get asked my thoughts on the Cleveland Cavaliers and Lebron James. People would sometimes ask me if was I a Cavs fan, and my reply would usually be “Nope, I’m not a Cavaliers fan, I’m a basketball fan.”  I’m a self-confessed basketball fan, to say the least.  I played varsity basketball 4 years of high-school, and was recruited by some division 2 and 3 colleges had i decided to keep pushing. But realizing that I was never going to make it into the league, and seeing that the benefits of starting on a big high school team far outweighed sitting the bench at a small college made the decision easy.  I decided to study Computer Science, got into making beats, and the rest is history.

But i digress, because this blog is about Lebron James and his move away from the Cleveland Cavaliers and to the Miami Heat.  To many people’s surprise I honestly didn’t care much about him leaving the Cavs.  I’m a basketball fan, and they just didn’t play good ball.  Mostly because they had a team filled with has-beens, current bums, and future bums.  Their development of younger talent (aside from Lebron) was terrible, and their knack for finding washed-up free agents and paying them too much was uncanny.  Plain and simple, their GM Danny Ferry should have been fired years before he actually quit.  To no fault of his own, Lebron never had the supporting cast his competitors had.

I could go on for pages about why the Cavs sucked and fell short time-after-time but it doesn’t matter anymore since Lebron James is gone now.  What I do want to comment on is his future, and why i think he may have fucked up big time going to the Miami Heat, and therefore why lebron James won’t win a ring next year.  Here’s why:

Now don’t get me wrong, the Miami Heat will be a very exciting team to watch.  Up there with the Denver Nuggets or the Phoenix Suns, but I foresee a lot of fundamental chemistry problems that could stop them from winning a title.  The main problem is that if all of your stars need to be in the lane to create shots then teams can defend them much easier.  The only resolution is to put some lights-out 3-point shooters on the floor, but finding shooters like that in the off-season is easier said than done.

Another line of thinking that’s being blown out of proportion is that the Heat will win a championship just like the Celtics did simply because they put three all-stars on the floor, which completely oversimplifies what the Celtics actually did.  Yes, the Celtics had three NBA all-stars but they each played different positions offensively, thus creating an offensive spacing that allowed each of them to shine.  The only true penetrator the Celtics have is Rondo; Paul Pierce usually operates from the foul-line extended, Ray Allen operates around the 3-point arch.  Without this spacing there’s no way Kevin Garnet would be able to get as many opportunities to score in the paint, and when KG gets good looks defenses have to account for him, which gives the outside shooters great shots.  Same theory applies to Dwight Howard.  Granted, Orlando shoots a lot of outside shots and has nobody who can really drive the lane, but Howard is able to get his shots because they have great spacing.  You have to defend the outside shot, and when you do he dunks all over somebody.

Now ask yourself, how is this going to work on the Miami Heat?

I think you get my point.

If you ask me, Lebron should’ve went to either the Orlando Magic or the Chicago Bulls, but hey I’m just a basketball fan and we’ll have to see how it plays out.  If they fuck around and win a ring and I’m wrong about this feel free to remind me.  If you’re a basketball fan, what do you think?  Do the Miami Heat have what it takes to win a ring next year?