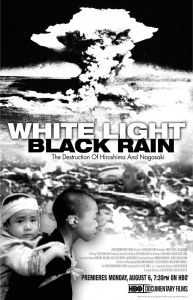 I’m pretty late with this but last week I discovered the beauty of renting DVDs from the public library. I’ve had friends tell me about it, but I was always too preoccupied with the books to pay any attention to the movies.  Well, last week that ended as I rented a handful of documentaries.

I’ve been reading a bunch about documentaries, but more from a technical perspective–I would like to actually make a documentary one day, so reading about the science and method behind their creation is fascinating to me.  But I digress.

This blog isn’t about me making documentaries, this blog is about the documentary White Light Black Rain.

I could recommend 5-10 great documentaries I’ve watched over the past 6-8 months, but this one is by far the most moving documentary I’ve ever seen.  There are a lot of documentaries about the atomic bomb, and the events leading up to it’s use, but I have never seen a film that approached it from the perspective of those who were affected by it–until now.  White Light Black Rain succeeds where other documentaries fail by putting faces with the horrible destruction.  Prior to seeing this film, I didn’t have much of an emotional connection to the bombing of Hiroshima and Nagasaki.  I’ve always felt it was fucked up, but it was still a footnote in American history, and American history tends to completely ignore those it hurts the most, so I had never dug deeper.  But White Light Black Rain changed that forever.

It’s one of the first documentaries I’ve watched that brought tears to my eyes.  It is truly sad that the people who were victims of the bomb are completely forgotten about in American history, and shunned in their own country (it’s revealed in the film that they are discriminated against in their own homeland as if they did something wrong).  At no point in my life did i ever consider the individuals who were effected by the bomb; the schoolkids, the teachers, etc.

I’m not here to debate history or get into a discussion about what side was right or wrong, but I do think we can all agree that war is a) very rarely justified and b) is chosen by the rich and powerful but usually fought by the poor, and c) takes the lives of far too many innocent people.

The stories are deeply personal and the images are beyond description.

I highly recommend you take an hour out of your day to watch this film.