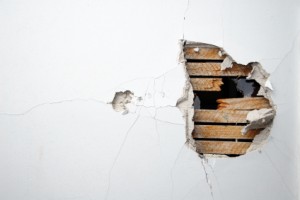 I’m no stranger to home repairs.  I’ve been a home-owner for about eight years now and have had some good experience in smaller remodeling projects and making repairs.  In addition, I remodeled a property (mostly by myself) about 5 years ago.  That was a long, drawn out process with a lot of twists and turns, but I learned a hell of a lot.  Not just about remodeling, but about the process and how patient you need to be.  Speed is definitely the enemy when it comes to home repairs.

Well, last week after I got the dust problem under control, I felt pretty confident and thought it might be the perfect time to take on some other projects that needed finished around the house. I was feeling pretty ambitious, so I started with some flooring in my guest bedroom.  I had put the flooring off for a long time because I was traveling during the nice months, and also because I barely ever have guests at the house or needed it.  Not anymore.  I was determined to knock that flooring out, and I did.

Once the flooring was finished and my confidence was even higher, I decided to take on another small project: a leaky bathroom faucet. I noticed the drip a couple months ago, but didn’t pay it much attention until last month when I got a water bill that was twice what my normal water bills are. I wasn’t feeling that, and told myself that the leaky faucet was going down, asap!

I quickly decided that the faucet had a bad stop valve. The valve wasn’t closing all the way and therefore water was slowly dripping out. I had installed stop valves on the house I remodeled and my own before, so this didn’t seem like much of a problem. I turned the water off at the house, let the pipes drain, and got my tools together. This would be easy.  During the time the water was draining, I decided to review my books and notes on replacing valves and welding, just to make sure I was up to speed and ready.  I even put the repair off until the next morning and spent the night visualizing myself changing this stop valve flawlessly, on some zen type shit.

I woke up the next day excited.  I had about three jugs of water in the fridge to last me during the time the water was off.  I was on it.

Unfortunately, things didn’t go exactly the way I had visualized them the night before.  The first problem I noticed was that after I cut the broken valve off there was a slight drip coming from the pipe. It wasn’t a lot, but it was noticeable. I was a bit confused because this pipe was the only one in the house that still had this slow drip, almost 24 hours after I had turned the water off and let the lines drain.

I had been without water for 24 hours already so I decided to go ahead and push through, thinking that the drip was slow enough to where it wouldn’t stop me from putting the new stop valve on correctly. Boy, was I wrong!  About four hours and ten soldering attempts later, I still hadn’t got a good seal on that new valve.  I was officially pissed off and frustrated.  Water kept leaking through the smallest, almost invisible cracks in the seal. In a last ditch effort, I decided that should try to put some cement/sealant on the small holes, but even that didn’t work. Water continued to leak out of the new valve. Now I was stuck between a rock and a hard place because turning the water on with a leaky valve was worse than the leaky faucet I started out with.  I couldn’t fix the leak, and I couldn’t turn the water back on.  I was officially stuck.

So I stopped and just sat there for a while, thinking.  I remembered something that an electrician once told me when he was fixing an electrical problem at the spot I remodeled.  He told me that most problems have clues, that alert you to what the real problem is.  Usually the clue seems really small or insignificant, so people overlook it, but finding the clue is usually where the real problem lies.  Otherwise, you will be spending your time and energy fixing the symptoms of the problem and not the problem itself.

I thought about that and realized that I had been fixing the symptoms.  The leaky faucet was just a symptom of a bigger problem.  Being unable to get a good seal on the valve was a symptom of a bigger problem.  They were both clues.  When I sat and thought about it, I realized that the real problem was something that I never would have assumed when I started the project – my main shut off valve to the house wasn’t working properly.  All the things I had been seeing were just clues to that pointed to that.  The leaky faucet was caused by a broken valve, that was was caused by the pressure of water that was never shut off, even when it was off.  I couldn’t seal the valve because the water was cooling the soldering and pipe before I could make a good seal.  It was all making sense now.

I remembered how my main shut-off valve had a drip a couple years ago and needed to be tightened.  The leak stopped but the valve itself has been in the house since it was built and had all types of corrosion and wear and tear on it.  It made perfect sense that the problem was the main shut off valve.

So I called in the big boys (i.e. the “real” plumbers) and had them fix the main shut off the following morning.  That was indeed the problem.  After 3 days with no water and many failed attempts at doing something I thought was simple, I finally got back to actually fixing the leaky faucet!

I wanted to share this story with some of my readers and fellow home-owners because of the lesson I learned about chasing the symptoms and not the problem.  This week, I learned first hand a lesson that was told to me a few years ago.

It makes me think not only of my house, but also of our physical health and our bodies. Very often when we get sick or don’t feel right, we chase the symptoms and not the cause.  It doesn’t help that we exist in a capitalist society that sustains itself by providing fixes for the symptoms, and none for the causes, simply because money can’t be made from curing the problems, only in suppressing the symptoms. This creates an environment where we are taught to rarely ask what the real cause is. My insistence on fixing the symptoms before fully understanding the cause of the problem turned a simple problem into a very complicated one. This experience with my faucet reminded me of how easy it is to get caught up in that cycle and rush into something just because it’s a quick fix, and completely ignore the root cause of a problem.

Hope this helps somebody out there.

My leak is finally fixed and I can take a much needed shower.