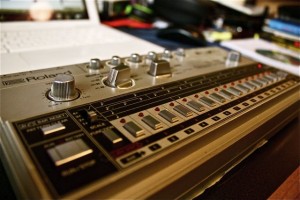 Yesterday I bought a used Roland TR-606 drum machine from craigslist.  For those that don’t know, the Roland brand of drum machines are synonymous with most of the music released in the 80’s.  You would be hard-pressed to find a record from that era that wasn’t made using one of the Roland drum machines; the most popular being the TR-808 model.  This model is so popular that people just refer to its sounds as the 808 kit, and an “808” is now slang for the really deep bass kick that’s used all over the place.  Even if you didn’t know what it was, you’ve heard it a million times, especially on southern rap records and 80’s music.  The TR-606 I bought originally came out in 1982.

Even though I experimented with the 80’s sound on Adventures in Counter-Culture, I never owned any vintage gear, so I had to work from memory and studying those styles more than actually owning the gear they used to create it.   I would’ve loved to own some vintage gear in the past but it’s usually pretty expensive, and I didn’t know if I would be using it enough to justify the purchase.  Luckily, I saw the 606 on craigslist for a price that was in my budget, so I went for it.  I spent a few hours last night going through the user manual and learning how to use it, and while it hasn’t even been 24 hours since I brought the TR-606 home I’ve been reminded of something that was starting to get a bit lost.

Creating art should be simple.

There are only 7 sounds on the TR-606.  Comparatively, I’m used to hundreds of drum sounds to choose from when I make a beat.

There are only two ways to modify the those sounds, volume & accent.  No pitch, no envelopes, no filters, and no effects.

It’s a machine you can learn how to use in an hour.  In the past I would spend weeks and months learning the basics of any software I used for beat-making. For example, I’ve watched two Ableton Live DVDs, read two Ableton Live books, and have had the software for six or seven months, yet still barely know how to make a beat that I like on it.  You can spend hours auditioning and tuning sounds before you even make a beat in Ableton and other software programs –  but not on the 606.  The 606 user’s manual is less than 50 pages, and half of those pages are tutorials where they show you examples of how to program beats on it.  There’s probably less than 10 pages of actual instructions.

The thing that immediately drew me to the TR-606 was its drum sounds, but the sounds aren’t even the biggest selling point of the machine – the biggest selling point of the machine is its simplicity.  You turn it on, you push some buttons, you hear some sounds, and it sounds dope.  No matter how advanced beat-making gets, there will always be a demand for simple ideas and a simplified process.

This entire thing has made me see that sometimes technology can get in the way of creativity. I’m guilty of it myself.  By no means am I a gear-junkie that has to have all the latest gadgets, but I’ve definitely let the tools detract from the process and remove the instant gratification and spontaneity that comes along with being creative.  It’s funny that it took a a 30-year old drum machine to teach me that, but I’m so glad I can see it.