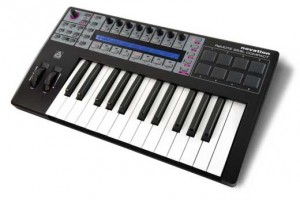 Instead of talking about a piece of musical gear I own and love, I thought it would be more interesting to dedicate this post to a purchase that I absolutely regret making.

See, artists have to have gear to make music, so there is almost an endless search for the right setup.  The right recording space, mics, keyboards, midi controllers, recording software, etc.  All of it has to be right for you so that when you get in there to make music your creativity isn’t interrupted by technical problems.

So you scope out gear, make lists, and demo things, going back and forth to Guitar Center making sure it’s what you what.  And then one day, when you’re money is right, you finally make that purchase.  Most of the time, it’s a great experience.  You get a great piece of gear that compliments what you do, and your music benefits because of it.

But every now and then it goes horribly wrong.

I have recently come to the conclusion that this midi controller is a complete piece of shit.

I remember reading about it on-line for months. The specs looked great; 25-keys weighted, great display, automap for reason & abelton, assignable knobs, assignable toggle switches, and to top it off it even had 8 drum pads. At the time I was using a Yamaha midi controller that I considered to be solid but not spectacular,  so I sold it to a friend and then traded an MPC 1000 that I hated for the Novation Remote SL.

My anticipation was so high, that when I got to Guitar Center and they told me the Remote SL wasn’t even out yet, I paid for it anyways, and waited 2 weeks for it to arrive.

Once I got it home, I started noticing the small problems almost immediately.

Second, the automap feature that was supposed to be so amazing, isn’t amazing at all.  It installs a 3rd party application that pops up every time ANY recording software is opened–even when the remote SL is disconnected or turned off.  On my laptop if I opened Reason, Garageband, Battery, or Abelton this stupid Automap software would pop open.  It was an absolute nuisance after a while.

Third, the drumpads.  The drumpads were a big reason I bought it.  I figured it would allow me to use one midi controller and not two.  Unfortunately, I soon found out that the drum pads were terrible.  They were impossible to assign, and even assigned they were so desensitized that you had to beat the hell out of them to get them to respond.

Fourth, faders and knobs are pretty much impossible to assign.  I’ve tried it numerous times and after a while I just gave up.  I really only realized how shitty they were after I bought an M-Audio Oxygen 25 midi controller for live shows.  You plug in the Oxygen, the software recognizes all the knobs and controls, and it just works.  You plug in the Remote SL and nothing happens like its supposed to.

In general, I hate to talk shit about a piece of equipment, especially since I’m sure somebody out there owns and loves the Novation Remote SL Midi Controller, but personally I regret I ever bought it.  I should’ve went with something by M-Audio from the beginning.  There’s a reason their midi controllers are far more popular.

If you are a electronic musician, please avoid this midi-controller at all costs.  The best part about it is the weighted keys.  It feels great when you’re playing, but that’s not enough.