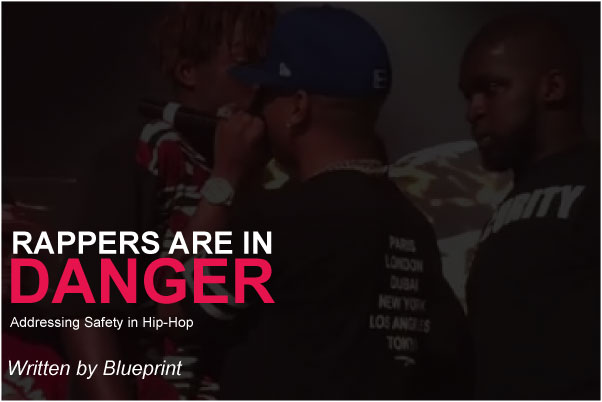 I woke up this morning to see a video in my youtube feed about the rapper Plies getting slammed off the stage at a show.  During an on-stage confrontation, a guy grabbed him by the waist and slammed him off the six-foot stage and onto the floor.  This happened in front of hundreds (maybe thousands) of people.  We tend to laugh when it’s a commercial artist like Plies, but even well-respected artists aren’t exempt.

Last month at SXSW, video surfaced of a man who ran on stage during Run The Jewels set. He tried to take Killa Mike’s microphone and, when he failed, he took a swing at him. A fight broke out that spilled off the stage and into the crowd, briefly shutting down the show.  Unlike Plies, Run the Jewels is one of the most respected and acclaimed groups in hip-hop right now, and this still happened.

A few months ago, a video surfaced of Afro-Man slapping a woman who jumped on stage and ran up on him while he was playing the guitar. The public’s general reaction was that he overdid it by slapping her so hard, but I’m not so sure. I don’t think there’s a professional guitarist alive who doesn’t think about how Pantera guitarist Dimebag Darrel was assassinated by a crazed fan on stage here in Columbus, Ohio back in 2004. The gunman walked up right up on stage and shot him multiple times in front hundreds of people.

Artists have to be in the moment when they’re performing. They don’t have the ability to pay attention to everything going on around them–only doing their thing to the best of their ability. Every fan that comes to the venue can pay attention to their surroundings, but performers can’t. This puts them at a disadvantage.  It only takes a few seconds for somebody to get to them on stage, and by the time they’re within arm’s reach it’s usually too late.  Think about that: during the time it would take a performer to grab some water or wipe sweat off their face, a stranger with bad intentions could be on stage right next to them.

Being a performer is a high profile job, but make no mistake–every artist that gets on stage is vulnerable.  And just because you go to live shows to enjoy good music and support an artist doesn’t mean that everybody is there for the same thing.  Living in an era where everything is filmed and uploaded for the world to see only gives people with bad intentions more incentive.

The first time I really saw this was back in 2002, when I was on my first tour with Atmosphere.  It wasn’t uncommon for people to rush the stage at any moment during our set, so I was always on guard. If Slug was rapping, I was doing his ad-libs, but I was also watching the crowd because I knew he would usually be the last person to see somebody rushing the stage. Sometimes it would be a girl that wanted to kiss or fondle him. Other times it would be a drunk guy who would just stand there or dance around. But there were many times when people would get on stage and we didn’t know why they were there.  All we knew is that we had to get them off stage as soon as possible because them being there was putting us in danger. A performer doesn’t have time to figure out people’s intentions–they have to act fast and get that person away from them so they can be safe.  Because every second that stranger is allowed to be on stage with you is another second that adds to their confidence to do whatever it is they set out to do.  From stealing or damaging your equipment, to touching or trying to kiss you, to attacking you–the longer they’re on stage the more successful they will be.

Next thing you know you are getting body slammed off six foot stages like Plies, swung on like Killa Mike, or sued assault like Afro-Man. I know these examples sounds pretty extreme, and I know that there are many times when people don’t get on stage with bad intentions, but these are the situations that flash through a performers head when they think about what could go wrong up there.  So while the public may say that Run the Jewels or Afro-man over-reacted, I just don’t think it’s possible to overreact when you are in such a vulnerable position and somebody is putting your career and health in danger.  I support almost every decision an artist can make to protect himself up there because I know what it’s like to be in such a compromised position.  To be in a city where you know almost nobody and are on stage by yourself. You’re the bad guy if you deal with it physically, but if you don’t deal with it physically you could be in the hospital or dead.

I don’t know if I had a real point to this blog other than to attempt to frame this situation from the perspective of a performer, because very rarely do I see performers speak on the fear and vulnerability they experience on stage and how that plays a role in their reactions to these situations.  And from what I’m seeing, there seems to be very little understanding or empathy for the performers. If you are a fan and reading this, please keep this in mind at the next live show you attend. Do us all a favor and don’t get on stage. Not only is getting on stage disrespectful–it’s dangerous. If you see somebody in the crowd getting out of hand or disrespecting an artist, please lend your eyes and ears to diffusing the situation. The performer can’t do it alone, so any help you can give them towards keeping things safe is greatly appreciated.  Whether we like it or not, these situations will continue to happen (and possibly get worse) until we all accept that it takes all of us to diffuse these situations.