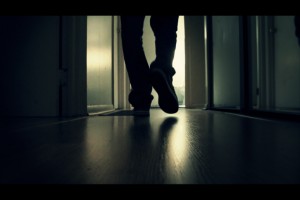 As many of you know, the ball has officially started rolling for my sophomore solo album Adventures in Counter-Culture to be released very soon on Rhymesayers Entertainment. Part of that process involves shooting music videos, so last week the director Bangland Media (who directed, shot, and edited the “Cold Out Here” music video) started working on the video for a song called “Radioinactive”. On Monday we visited the Abstract Rude show and on Wednesday we visited the Eyedea & Abilities show to capture some cutaway footage for it. Some of you may have been there and may have seen the camera rollin while we were hanging out.  On Sunday we shot some more inside stuff and I’m really happy with how everything’s starting to look so far.

We’re also shooting some footage inside as well, and here are a few screen shots:

Here are some shots my dude took of us actually filming the video: