I played a show in Atlantic City, NJ for the first time last week and found it to be a really interesting place.  Prior to that, I had only heard about it and knew absolutely nothing.

Usually, when you get done driving seven or eight hours and arrive in a new city, the first thing you wanna do is roll down your windows and take in some air.  Unfortunately, the air smelled really weird, and by weird I mean not good.  I knew that we were near the ocean and expected it to smell like the ocean but, instead, it smelled more like a giant swamp.

Then I checked into my illustrious two-star hotel.

When I came back with my reservation number thirty seconds later he says, “Oh, I found it.”  That clown knows he didn’t even look the first time.

On my way out of the lobby I glanced at the vending machines and saw something I never would have imagined: individual Black & Mild cigars being sold.  That’s right, black & mild loosies.  Amazing.  DJ Rare Groove would have been in heaven.

It was about midnight when we got to Atlantic City so we decided find something to eat. That was much easier said than done.  There was literally no place to eat after midnight in that wasn’t in a casino.  Even McDonald’s closes at midnight.  We drove around for over 30 minutes, just looking for something, with no luck.

While we were driving around, we noticed how huge hotels and casinos were built right next to people’s houses.  There was no separation.  It’s as if the people said, “nah man, we don’t want casinos here” and the city said, “fuck you, we’re gonna build them anyways” then proceeded to build casinos right around and on top of residential neighborhoods.  It’s really odd and I’ve never seen anything like it before.  In other states that have casinos, like Las Vegas and Reno, there is a separation between residential neighborhoods and the casinos and resorts – but not in Atlantic City.  You can tell a lot of rules had to be broken to turn this city in to what it is.  Donald Trump’s name is on almost everything, and almost everything that bears his name looks obnoxious…kind of like his hair.  Money can buy you a lot of things, but apparently not style or taste.

As we drove around Atlantic City looking for food at 12:30 am on a Wednesday night, we noticed all types of people out.  Almost everybody outside looked like they were up to no good. And I dont mean that based on how they looked – I mean that based on how they were acting.  Girls hopping in and out of cars, looking like they were either on their way to turn a trick, or coming back from turning one.  Prostitutes standing on the corner in packs, blatantly doing their thing.  Crazy drug addicts running around.  Random people posted up in front of buildings, in the middle of the night, just doing nothing.  And the wildest part about it all was that we seemed to be the only people who noticed how bugged out it was, which probably meant that what we were seeing was normal to everybody else.  It was even weirder because there was no separation between the neighborhoods and the casinos, so all the activity was all jumbled up together. It was a weird juxtaposition to witness that time of night.  We saw a few families walking around in the midst of all the chaos that looked like they just wanted to get home.  But overall, it just looked like business as usual.  We didn’t even notice a lot of police out.

As odd as it may sound, I love these kinds of cities.  Not because I have a secret fascination with decadence or criminality, but because Atlantic City, unlike most american cities, does its dirt out in the open.  Atlantic City isn’t the girlfriend that secretly does coke and cheats on you – she’s the girlfriend you take to a party and she does coke and cheats on you while your there.  And for that, you gotta respect the fuck out of her, even though she’s not right for you.

We found food at the only thing that was open, Wah Wah, and it was just as we expected – not normal. A dude walked in with no shirt, no shoes, and just some swim-trunks on, then proceeded to dig in his crotch while he ordered and waited on his food.  I ordered a sandwich and had to place my order using a touchscreen instead of talking to an employee who was two-feet away from me.  Every couple of minutes, an amazingly fine woman would randomly walk in.  A lady was putting some stuff in the recycling bin outside the store and was ready to scrap with another lady who accidently bumped into her.  We were the only people tripping off any of this.  To everybody else it was just Atlantic City being Atlantic City.

I told my DJ that regardless of how the show went, we were going to meet some amazing people in this city.  People who had been through a lot and had amazing stories to tell.  As expected, every single person I interacted with in Atlantic City was pleasant.  Not a single asshole.  Just hard-working people.

The show the following night went pretty much as expected.  Nobody expected the crowd to be huge, and they weren’t, but they represented pretty well for a city that doesn’t get shows like ours very often.  There were quite a few heads and familiar faces that made the drive from Philly, which helped make Atlantic City feel much more comfortable than it should have felt for my first visit.  From what I hear, there was even a couple spotted having sex in the back of the venue!  I apparently just missed it. I took that as Atlantic City being Atlantic City, and another example of them being public about what other cities do in the dark.

A friend from Philly said they were considering taking a vacation in Atlantic City and wanted to walk-thru a hotel and resort next door to the venue we played, so after the show I walked over with them.  The place was crazy.  In fact, as soon as you walked inside you forgot you were in Atlantic City.  It was nicer than every hotel and resort I’ve ever been to in Las Vegas.  It had a real artsy feel to it, and there were a ton of locations to take pictures at. 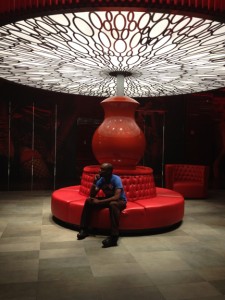 As we walked around and scoped the place out, I made the comment that the people in this place didn’t seem to know there was a recession going on.  So much excess and money was being spent inside this spot, yet literally 50 feet away there was nothing but poverty and people fighting to survive.  It was almost surreal.  I felt like there were two different Americas; one for the rich and one for the poor.

I remembered all the labor union signs I had seen all around town and in the House of Blues.  I thought about how much money, power, and corruption it takes to turn a city into what Atlantic City is, and figured the strong union presence is probably a response to the same forces that have put Atlantic City in its’ current position.

For the first time in my touring career, I felt I needed to do more than just visit places, accept things I see, and make generalizations. I need to research and gain an understanding.  I want to understand the history and decisions that were made by those in power that made Atlantic City what it is, because there’s a reason why the city has become what it has, and it seems like nobody I know is asking the questions or talking about why that is.

People tend to call Atlantic City the “Las Vegas of the East Coast” but I’m not sure if I would take it that far.  From what I’ve seen, Las Vegas is the playground of the west coast.  Atlantic City, on the other hand, feels more like the dumping ground of the east coast.  It seems like all the things that other cities don’t want to allow and annex are sent to Atlantic City and approved with no problem.  Things that are common sense and good for the general population seem to be thrown aside in favor of what’s best for the casinos and the rich, gambling, tourist population.

For the first time in my touring history, I’m going to actually try to do some research on a city that I’ve played in, and try to understand its history and current situation.  Not because I think I can fix it, but because I have a theory that understanding what has happened in Atlantic City will go a long way towards understanding what happens all the time in our country when power is unchecked.  Too often we go places and pass moral judgements on the people who live in places like Atlantic City.  It’s very easy and self-righteous for us to believe that their position is something they deserve or they caused by themselves.  It’s convenient to ignore the fact that most power and wealth is built on the backs of the poor and uninformed.  Talking shit about poor people and ignoring their existence allows us to never ask the real questions.  I don’t want to be one of those people anymore.  I want to do the work and the research.  I would like to understand this world we have created and live in and I’m prepared to accept any uncomfortable truths that may reveal, even those that expose my own privilege and biases.

p.s. if any of you are from Atlantic City and would like to share some of it’s history below, please feel free.  I’d love to hear your feedback.