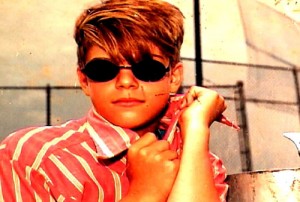 I stumbled upon this movie by complete accident.  I was using google to see if i could find some short films done in iMovie, trying to see just how far people had gone with it in their editing and film projects.  Apparently, they’ve gone pretty damn far with it.  I came across an article on Wired that talked about a movie called Tarnation that was edited completely using iMovie.  It went on to get tons of praise at the Sundance Film Festival.

Tarnation chronicles the life of Caouette’s dysfunctional family. His mother, a fashion model, was a victim of severe abuse, and Caouette’s childhood, spent partly in foster homes, included daily doses of violence, drugs and unpredictability.

The best part is that it was made for only $218.32.  I realize that this is was done six years ago and isn’t new by any means, but knowing what I know about iMovie right now I still think it’s amazing.  The trailer alone is intense.

Peep the trailer after the jump:

Kind of makes you realize that the true strength of any weapon lies in the person wielding it, not in the weapon itself, right?

If any of you have seen this film already hit up the comments and let me know what you thought of it.  I plan on checking it out this weekend at some point.