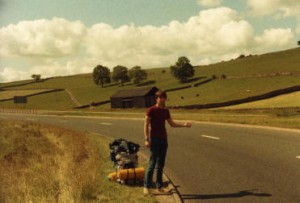 As I was driving to Cincinnati today for some tour rehearsals with DJ Rare Groove I saw a cat standing by the freeway entrance, hitchhiking. The first thought that popped into my head was “damn, he’s got an awful lot of shit with him“.  The man had two bags with him, which to me seemed like a lot. Then I stopped and wondered why it seemed like a lot to me, and I realized that the only reason I thought he should have less with him was because I was looking at him the same way I look at homeless people, and since homeless people travel light he should be doing the same, right?  Not really.

In America, the consensus seems to be that if you’re hitchhiking then you’re homeless. But having been fortunate to have traveled to other countries I’ve seen first hand that hitch-hikers aren’t looked on with such disdain elsewhere. They’re actually treated with respect, as travelers on a common path who are respected.  Not like good-for-nothing, homeless, vagabonds who are only out to rob you or exploit your kindness. Now, I’m not saying that there aren’t hitchhikers who don’t fit in that category, but its kind of fucked up to assume the worst about everybody.  FYI, don’t think I’m judging any of you reading this, because obviously I just did the same thing.

The worst part about assuming the worst about hitchhikers, isn’t that you assume they’re homeless, but that somehow we manage to shift the focus away from the real problem (i.e. america is fucked up), and use the homeless angle because it puts them in a “not like us” category, which makes us feel better about snubbing them.

Another thought that popped into my head was that what we know as hitchhiking, and how Americans see it as bad or dangerous, has been a perfectly normal way to travel between communities since roads were built. Just think about how long ago that was and how many countries that encompasses.  As long as there have been roads, there have been hitch-hikers, and as long as there has been cities there has been hitch-hiking.  That’s a long time.

People (and corporations) love to pat eachtother on the back for carpooling to work and spout off about how it saves fuel, energy, and removes cars from the road.  Yet, when it comes to traveling from city to city, we lose our entire sense of conservation and community. It’s particularly odd when you consider that hitchhiking is the oldest form of carpooling known to man.

The more I write the more I realize that maybe this isn’t as much about hitchhiking as it’s about how crazy America is in the way that we put people in boxes and alienate them for things that are perfectly normal in other countries and cultures. Now, I’m not saying I’m going to start picking up hitch hikers all the sudden, or that I even expect you to, but I am going to stop assuming the worse about them and using that fear as an excuse to dismiss them.