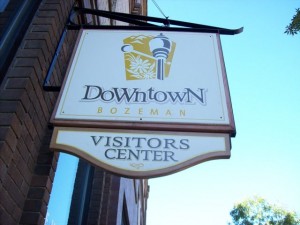 I’ve only been to Bozeman Montana once before. I was with Atmosphere and we played at the Zebra Lounge, in downtown. It was a really small, intimate, dark club, and the show was 21+.

This time around pretty much everything was the opposite.

This time around the club wasn’t a club at all. It was a big ass barn on the fairgrounds. One of those spots where they have livestock competitions and auctions. Dirt floors and all, with bleachers along the right side. The building was completely made of metal, so the acoustics were pretty weird, with the sound bouncing off the walls in a way that could be pretty abrasive at times, but was to be expected when you consider that concerts were probably the farthest thing from their minds when they built the place.

So we played there last night, and it was live as fuck.

Early in the night I could see the crowd getting real hyped to the music groove was playing, especially when he played Old Dirty Bastard. You saw a bunch of W’s go up in the air.

The crowd was easily the youngest crowd we’ve seen of the tour. It was sold out at 1800 capacity, and my guess is that at least 80% of those kids were under 21. Lots of highschool aged kids.

I always remember Missoula crowds as doing this weird moving mosh pit kind of thing, where almost the entire crowd will sway side to side with the beat, almost in unison. it’s not exactly a mosh pit because nobody’s jumping out individually, but it looks like a gigantic wave made of people, swaying left to right as you perform. It’s something I’ve never seen anywhere else. The crowd in Bozeman was doing that last night. It looks really chaotic at first, but its fresh because they actually move with you as you’re rocking.

The acoustics were weird to where I’m pretty confident that it was difficult for the crowd to hear my lyrics last night, but I’m not sure if that mattered. They’re more into the energy of a performance there. Met a lot of supporters at the merch table.

The funniest shit I saw all night was a kid leaving the drinking section of the club with his pbr and security telling him he couldnt take it into the all ages section. The kid says ok, then asks if he can finish it, and they say yes. Dude proceeds to chug about 90% of it, then take the can and spike it on the ground right at securities feet, then take off running. It was so funny, but i didn’t laugh because the security dude looked at me like WTF? I just shook my head and looked down.

At the end of the night a dude asked me if I could go get Slug and tell him to come out. I assumed it was because he wanted him to sign something, but when I asked why he was like “because i wanna battle him!” I was like “oh, nah dog, I can’t get slug out here. he’s a grown man. he does what he wants to do.”

The buildings and businesses in Bozeman have some really interesting character to their design. Lots of random sculptures and statues all over town. A lot of their business signs have some great looking signs as well. I took a bunch of pics below.