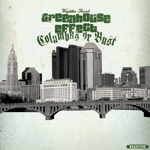 The album Columbus or Bust was released in 2005 a few weeks after 1988 was released.  I’ve always felt that because it came out so close to 1988 that it never got it’s proper shine.  This situation was made even worse by the fact that we licensed the record to another label to release and they did a horrible job in every aspect.  But that’s besides the point.  The point is that as we begin to release newer Greenhouse material, it’s important to us that people know that we have been around for a while, releasing records since 1999, and that we keep our older records available so that people can check out the older music and see our progression.  Hell, I never thought when i was dubbing tapes back in 1999 that doing music would ever be a full-time job and even if it was ever to become that, I never imagined I would be fortunate to do it this long.

So for those that want to take a step back to 2005 and hear some vintage Greenhouse Effect music (back before we dropped the word “Effect”) take a listen and enjoy.  The high-quality digital-version is the only version available right now, but next week we will release the deluxe digital versions and cd versions which will include all the instrumentals from Columbus or Bust.

Thanks for your support