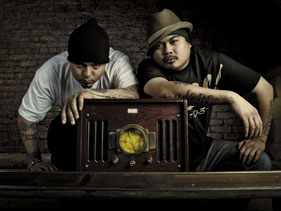 In 2005, shortly after my album 1988 came out, i was on the Scribble Jam tour with my dude DJ Raregroove, Mr. Dibbs, and Glue.  The tour ended in Portland, OR but instead of driving back with everybody else, me and raregroove decided to spend a few days in Portland kicking it and then fly back to Ohio later that week.  Considering everybody else on the tour was gonna be trapped in a bus for 2 or 3 days in route to Ohio, getting drunk everyday and kicking it in portland seemed like a much better option. So we played darts, went out, dug for records, and while i was there i recorded a song with my fellow rhymesayers brethren Grayskul.   The song is called “Blueskul” and its produced by Coley Cole.

It was intentionally slated for their second album Deadlivers, but the song didn’t make the cut.  Considering I hadnt heard the song since i wrote and recorded it (and had never heard a version with Greyskuls verses on it), i was was pretty happy they sent it to me last week.  Either way the song is now 5 years old and since nobody has really heard it i figure i would give it to you all.

Here is a link to the song: