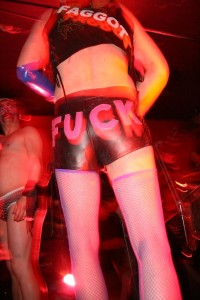 I’m somewhat drunk so i don’t even know where to start this one, but I think i will start from last week. Last week Ron (Carabar owner) was like “Al, i dont ever tell you to come to specific shows, so take me seriously when i ask you to come to this show next week…tuesday. Faggot is playing.” So i remembered it but still forgot today until around 1130 or so. At any rate, I showed up and just missed Dead Sea play, who happen to be my favorite live act in Columbus. Matt Minor from Teeth Of The Hydra’s new band (whose name escapes me) played next, and since i was ordering drinks i can only claim to have heard about 75% if what they were doing, but it sounded good.

But its time to cut to the chase. Which is this band Faggot. Ron warned me about them but words cant really explain this kinda shit . you have to be there. Either way, this show tonight might have been the most amazing show i have seen in my entire life. This band Faggort kicked so much ass that it was worth being in the middle of the mosh pit just to fully understand what was going on.

For those that don’t know, Faggot is a metal band, and all their members are homosexual, i think. That needs to be established off top. So when you saw dudes walking around with FAGGOT on their jackets or ass, and with sequence tops on, it wasn’t a coincidence or for the shock-value, that’s just how these dudes roll. it was amazing so they start their set and its pandemonium off top. mosh pitts, crowd surfing, etc.

But as you wouldn’t expect, they had 2 different hype-men/dancers. one they referred to as “cum dumpster” and one whose name escapes me but it was either “jaime” or something like that and down for his crown. he wore nothing but some black briefs with white stripes the entire time. I’m faded but i’m confident it was jaime. So they introduce their hypmen/dancers and shit get live as fuck immediately. Dudes in the band Faggot were clearly not trying to stay in the closet, which may have been the coolest shit ever, but their dancers were off the hook. At many points you would see dudes who were butt ass naked crowd surfing, stage diving, or making out with the lead singer in betweeen his lyrics. It was crazy, to say the least. It was like having 2 flava flavs but they both got to make out with Chuck D in between songs. AND they were making out with other dudes in the crowd. One of them had on boxer-briefs, and the other one was naked at various points.

Now, off hand (judgingby the music) you just felt like you were at a metal show. But this was something extra. At one point the lead singer of Faggot said “we’ve got one more song left, but if yall wanna hear two then take off your clothes” and guess what happened? a gang of dudes took off their clothes and started moshing. At this point i might have seen a broad with her top off too. I’m talking half the dudes in the mosh pit were butt-ass naked with their balls out moshin with other dudes. there were also various chicks in the pitt mixing it up too. shit was that crazy. a butt-ass naked dude would hit the floor from the pitt, and another half-dressed dude would take his place and help him up, then get knocked down. It was truly amazing.

I would be lying if i said I’ve ever seen such a thing in Columbus, ever. I could go on about the amazing moments that i saw tonight because there are a ton, but i do want to touch on the fact that tonights show was liberating as fuck. This band has some serious balls to do what they do, and it was so amazing to see a pitt full of dudes, who may not even have been gay (but obviously secure with their sexuality), get down with them. That’s a good move. Nobody gave a fuck tonight. And if i can deal with that then i know you can.

i kept seeing dudes who were headbanging to the earlier bands take off more and more clothes, until they were down to their boxer briefs, and the music came on. At that point they started wildin out like very body else,; moshin, crowdsurfin, singling alongs, etc. shit was amazing and i’m glad i was there to witness it. So while, i still don’t feel comfortable enough to stay the word faggot in a song or in conversation, I want yall to know that this band was the shit. They didn’t give a fuck. The hypeman would make out with a dude in the crowd, then turn around and make out with the leadsinger, then stage dive two seconds later. It was so amazing that i cant even really give you a complete summary of what went on tonight because you really had to see it to get it. And being a tuesday night made it all the more awesome. So i’m gonna pass out. and try to do some diligence on this band, then try to edit this drunk ass post tomorrow. Good night

Photos by Matthew Woellert (aka “chubbs”).

Note: No, these are NOT safe for work and YES they do look really gay.  But this show was one of the wildest shows I’ve seen in my life so i might as well just post all the pics.