Here’s the link to the Columbus Alive feature on Greenhouse for those that missed it: 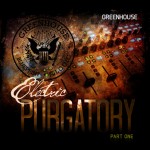 In the decade-plus since Weightless Recordings began as a street-level hip-hop enterprise, Greenhouse (formerly Greenhouse Effect) has been the label’s flagship group, comprising label head/rapper/producer Blueprint and various other rappers. For Blueprint, aka Al Shepard, it was often an exhausting ordeal.

“Creatively, I had to drive so much of the Greenhouse thing, whereas I think a lot of people just sat back,” Blueprint said. “I couldn’t get dudes to do anything.”

Last winter, after a falling out with last remaining group member Manifest, Blueprint took a step he’d been eyeing for some time, bringing longtime collaborator Illogic into the Greenhouse fold.

Though they had never recorded together as Greenhouse, the pair has a long history. Blueprint produced Illogic’s first two albums, and the rappers have guested on some of each other’s best tracks. It only seemed natural to establish a more permanent partnership.

“He and I have a real similar work ethic in terms of our output,” Blueprint said. “I could sit around and do the production for a whole EP in a week or two. He could sit there and write all his rhymes in a week at work. When we come together, it’s really fast.”

The fruitful collaboration spun out into unforeseen directions last winter while the duo was working on forthcoming full-length Bend But Don’t Break.

“We were getting into the album heavily, and I think I just had a period where everything I was doing sounded really dark and wintry,” Blueprint said. “Usually when I get to that point, I won’t let anybody hear the beats because I’ll feel like, ‘Oh man, this weather’s affecting my sound too much.’ But this time around we just kind of embraced it.”

The artistic detour resulted in the first in a series of new EPs, Electric Purgatory, Vol. 1, to be released Saturday with a show at Skully’s.

They plan to crank out a second volume of seasonal-affective jams this winter and may drop more similar releases in the future rather than expand the concept into one self-contained album. They said they prefer to work in short, focused blasts.

“Most classic albums are short,” Illogic said. “You look at most of the classic albums and they have 12 songs max, usually. EPs are perfect for that. You don’t have time for filler.”

This six-song set is built on ominous strings, gnarly synth blurts and cold, heartless drum machine patterns, a foreboding musical climate that sent the MCs to some of the more shadowy corners of their brains. There’s a distinct feeling of unrest throughout these 28 minutes.

In particular, Electric Purgatory addresses a trusty meta-theme so prevalent in hip-hop: the artist’s struggle to endure and create in the face of hardship.

The Greenhouse guys wisely don’t beat the dead horse of me-versus-the-world martyrdom, but the EP is littered with references to the obstacles facing aspiring artists and the glories of going it alone – consider lyrics like “Waiting on a record deal is like waiting for FEMA,” track titles such as “Never Gonna Make It” and an interlude that declares “99.9 percent of bands never get paid.”

In light of their lyrical subject matter, the rappers had a laugh about how much the hip-hop landscape has changed since they started hawking self-released albums at a grassroots level in the late 1990s.

“When we first started selling tapes, people kind of looked down at us because you could still get signed in that era,” Blueprint said.

Illogic chimed in: “Now people looking at you crazy if you trying to get a deal.”