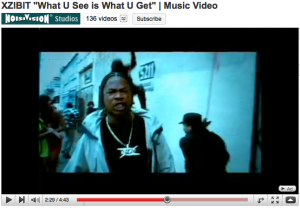 Just like a lot of cats that came up when i did, I’ve got a lot of nostalgia about it.  Not necessarily on some everything was better back then type of shit, because technically I think there are better rappers out right now–but when I think back to how dope and creative hip-hop music videos used to be, it’s hard to not think that current videos have taken a step backwards.  You would think that since the cost of technology has decreased that we would see an increase in creativity, which may be the case in terms of output, but I’m personally having a hard time finding the same level of creativity that was around in 90s hip-hop videos.

Case in point, Xzibit “What you see is what you get”.  It’s a shame that a lot of younger people only know Xzibit as the man from the Pimp My Ride show, because at one point dude was a very serious and credible hip-hop artist, with two really good albums under his belt.  What You See is What You Get was the first single from his sophomore album, and boy did he come out swinging.  The video is probably one of the best hip-hop videos of all time, and it was shot 12 years ago.  The biggest testament to it’s impact is how many times newer artists have tried to copy it lately (i.e. J-Cole twice), yet the original is still more creative and better executed.  And let’s not forgoet, the song is dope.

Video & Directors Notes after the jump:

I produced this video, which was a lot of fun to make. It was the longest running music video on BET when it originaly aired.

Trivia #2: There is no violence depicted in the video. There are looters, cops, exploding cars, etc., but no violence.

Trivia #3: Flava Flav and the Alkoholiks are featured in the video

Trivia #4: In the looting scene, the guy crashing through the window holding onto a box was our stunt coordinator, Branscombe Richmond. If you look closely, you will notice there is nothing inside the box.

Trivia #5: The concept of the video, i.e., making it look like one continuous shot with no cuts, was Xzibit’s.