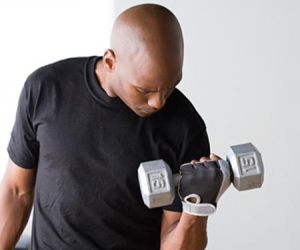 The other day, a friend made a  comment on how in shape they thought I was.  I’m not really ripped or anything like that, but I am pretty lean and thin.  I think the comment was rooted in the fact that I don’t really come off like a health freak or obsess about working out, and usually people who don’t do either of those things are out of shape.

I’m sure a part of it is genetics, but I would like to believe (or at least I tell myself) that I put a decent amount of effort into staying healthy.  I try to ride my bike two or three times a week, for an average of 10 miles each trip.  In the winter, when I couldn’t ride my bike, I lifted very light weights two or three times a week, and walked on a treadmill that I’ve got in my basement.  I despise running or jogging, but on the days that I ride my bike I also shoot some basketball by myself.

Around January, I decided to stop eating so much meat for a couple months.  I lost ten pounds as soon as I cut meat out of my diet.  Unfortunately, it’s very tough to keep it out.  I went the first two months without eating meat at all and now eat meat once or twice a week on average.  I never had plans on becoming a vegetarian, but my body has responded positively by me eating less meat and introducing more vegetables into my diet.  I don’t know how to quantify it, it just feels better.

The absence of beer and alcohol has also contributed to me feeling much better and as well.

I still pig out and eat dumb shit once or twice a week, but at least now I make a conscious effort to eat right the rest of the week and balance it out.

The whole thing has made me want to discuss this with others and see how often you guys work out and how active you are right now (if at all).

How often do you work out?

Do you consider yourself in shape or a work in progress?

Is it something that you’ve started recently or have you been consistent with it?

What kind of results are you getting and are you happy with them?