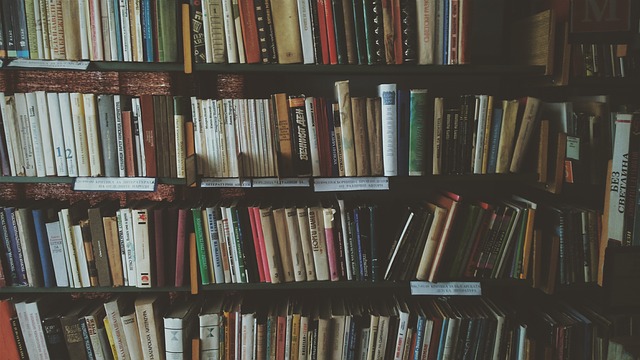 Like most kids, I was huge fan of comic books growing up. In fact, I have to credit comic books as being the first thing I was ever excited about reading. Regular books were just boring to me, at least until I was fifteen or sixteen years old. But even as a teenager, I wasn’t very much into reading. Back then, we were too busy running around and playing sports to sit down and dedicate significant time reading anything that was beyond our school assignments.

Things really changed for me when I stopped drinking. All the sudden my mind started clearing up and I had a burning desire to read and learn more. So, for the first time in my adult life, I got a library card. Ever since then my reading habits have been strong and steady. I look up books online, then check them out from my local library if they’re available. I do buy many books that I think I would like to keep as reference but, overall, the Columbus Public Library is my go to spot.

Unfortunately, I am not perfect when it comes to the books I check out from the library. Truthfully, I tend to turn my books in a couple weeks late all the time. I always feel guilty about it because a lot of times I know somebody else has requested the book I’ve checked out and I’m stopping them from reading it by keeping it longer than I was supposed to. The end result is late fees, which never get above the library’s ten dollar limit before I’m prevented from checking out anything else. I gladly pay these fines every couple of months and continue checking out more books.

Well, at the end of last year, the Columbus Public Library system announced they would no longer be charging late fees for books and media. When I saw this news on twitter, I was super-excited. The idea of not having to pay late fees was pretty appealing since I was paying late fees every few months. I already had two or three books checked out at the time of the announcement and this meant that I would have more time than usual to finish them without the threat of late fees hanging over my head. As soon as I finished those books I would check out a bunch more and finish them at a more relaxed pace.

I still haven’t returned those books. And it seems like every time I notice them on my desk and remember that I need to finish them, I get an e-mail from the library telling me that they’ve been automatically renewed and I don’t have to return them.

In addition, there are no late fees being charged for all the extra time I’ve had the books.

It’s been over three months and I find myself with almost no urgency to return the books I’ve checked out. Even worse, I find that my urgency to read them is diminishing. While I did generate some late fees in the past, I would rarely keep anything out as long as I have these past few months. I find myself looking at the books and telling myself that I’ll get to them another day, almost every day, and that day hasn’t come.

As much as I thought it was a great idea when it was announced, I’m not so sure about this no-late fees thing that the Columbus Public Library is doing. I can’t speak for everybody else, but to some degree it has reduced my urgency to finish and return books like I did before.

What I also find weird is that I still have the urgency to read all my other books that I got from Amazon or used book stores and I think that’s because I actually had to pay for them. Whereas no longer having late fees for the library books has made me very complacent about reading or returning them. This is not a good scenario for me.

This new policy has revealed two very interesting truths about human psychology that I’m not not sure I was ready to deal with before.

The first truth is that value does not exist in a vacuum or bubble, it exists in a marketplace. Thousands of years ago a diamond was just another type of shiny rock. Sure, it looked great, but since there was no market there was no value. The value of the diamond only began after certain people and groups determined it was rare and decided it would be worth more than any other rock (or shiny rock) for that matter. Without scarcity (and demand for that scarcity) a diamond is just another rock, and there is no real market for regular rocks.

If I were to be completely honest, I would have to admit that somewhere deep inside me the books I’ve gotten from the library have become a little less special to me. Knowing the books had a clear value and were wanted by other people played a part in me reading them with a sense of urgency and returning them on time. Now, a small part of me feels like my library books are no longer that shiny rock that they used to be. And because they aren’t as special, I’m not as excited about them. I know what I’m admitting is pretty messed up, but I’m just keeping it real here.

So what happens when negative behaviors are no longer punished?

Will people do what’s right even though there is no punishment for doing what is wrong?

Based on what’s happened to my behavior with these library books, the answer is no. I wonder if I’m the only person struggling with this new situation. As simple as it is to just finish a book and return it on time, it seems to be much harder to do when there are no consequences attached. As much as I didn’t like library fines–I don’t think anybody does–they did a great job in helping me retain a sense of urgency about returning the books and reminding me of the books value.

Now I’m in limbo. I wanna be excited about reading and returning my library books again, but I feel like something special has been lost. In the immortal words of B.B. King, “the thrill is gone.”  It seems like life without library fines isn’t at all what I thought it would be when it was first announced.  Don’t get me wrong, I’m sure there are many people who can’t afford the late fees who are happy about this new policy change, but I find myself secretly wishing they would bring back the late fees just so I can get my act together.  Is this what the world would look like without library fines?

I feel pretty guilty about admitting this but, on the brighter side, writing this has inspired me to finally return those books.  Wish me luck.