No real hip-hop going on this weekend in Columbus, but definitely some good rock shows to check out.  Although it’s Halloween weekend and I’m sure there are a ton of things going on that involve costumes, I’m gonna recommend two shows that i think will be fresh because of the line-ups: 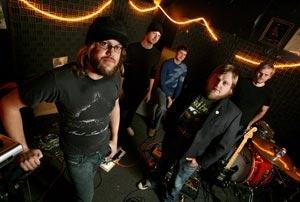 My first time hearing The Receiver was a couple years back when i first started getting into Brainbow, but i havent been able to see them play live since.  I actually did go to their CD release party to buy their album, but i ended up having to leave because i was playing a show somewhere else the same night.  But stylistically this show makes a lot of sense.  I will probably be at this one early in the night on Friday passing out flyers, as i don’t expect it to run particularly late.  If you get a chance check out both of their music because they’re easily two of my favorite bands in columbus.  Unfortunately, I dont know who else is playing on this bill, but the two bands alone make it worth it.

El Jesus De Magico is the shit.  If you’ve never checked them out please do yourself a favor and check them out.  I’ve even sampled their music before and they always put on a good show.  They will be doing the halloween throwdown with their Columbus Discount Records label-mates Necropolis on friday as well.  It sucks that both of these shows are going on the same night, because my guess is that there wont be anything worth checking out on saturday, or at least nothing to this level.  Carabar is always free, and this show will run later than the skully show so this is probably a cool way to end the night.  I think I’m gonna try to get to this one around 1230 or so.

Have a good weekend.  See yall monday for episode one of the video blog.