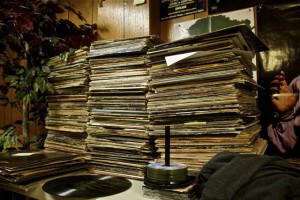 A little while back I was asked this question about sampling on Twitter.  I wanted to answer it there, but I realized that would be pretty difficult because of the 140 character limit, so I decided to write some thoughts on it here.

@printmatic I'm curious about your thoughts on this vs sampling vs fair use via the "transformative work" clause. Where is the line?

To discuss sampling properly, I think it’s necessary to talk about it from three distinct perspectives: the artist doing the sampling, the artist being sampled, and the rights owner of the sampled material.  I’ll write my thoughts on each perspective.

1. As an Artist Who Samples Other People’s Music

This is the role I’m the most familiar with.  Before 2011, every single piece of music I ever released had samples in it.  In my opinion, one of the main tenants of hip-hop is its’ ability to take things out of their natural context and redefine them.  From fashion, dance, language, to other genres of music – hip-hop has survived by re-contextualizing other elements of culture and reintroducing them as hip-hop.  In my opinion, nothing embodies that process more than sampling.  Music that is hard to find, unheard, and often unappreciated is reinvented and reintroduced to the hip-hop audience through sampling. The majority of this audience would have never heard that music without the hip-hop producer who dug into the crates and brought it back.

That being said, I love what sampling has done for hip-hop and I will always love sampling.

Most hip-hop producers spend a lot of time flipping and bouncing samples in attempts to make them unrecognizable.  Part of this is to hide the sample from a potential lawsuit, and the other part is simply for the sport of it.  This brings me to the question of fair use in sampling.  How far does a sample have to be flipped before it’s considered transformative?  How much do you have to transform it before it’s yours and not theirs?  Who gets to decide?

It’s sticky.   However, I will say this:  I don’t think we should ever forget that what we are sampling is somebody else’s creation.  We can dress it up all we want, say that we flipped it or chopped it, but there is no denying that our work wouldn’t exist without the original sample, and that fact makes it difficult for me to deny that our work is derivative.   If you’re sampling, then what you create is derivative.

Where do we draw the line?  Unfortunately, I don’t think the person who does the sampling gets to draw the line.  I’ve always believed that if the owner of that music recognizes their music in your beat, then you’ve crossed the line, and they have the right to do whatever they want to stop it.  From cease and desists, to pulling your record off shelves, to lawsuits – it’s within their rights as the person who created it to do what they think is necessary to protect the integrity of their work and get paid fairly (or unfairly) for what they wrote.

I believe more people would sample legally if it were affordable and easy to do so.  Sampling lawsuits have basically driven the art of sampling completely underground.  because the only people who can get away with it legally are the super-rich rap stars like Jay Z, Eminem, and Kanye West.   The rest of us have to either do it very low key or release music free so we won’t get sued.   I think this needs to change.  I think sampling laws and rates should mirror the rates for doing cover songs.  As it stands, it’s much more expensive to sample one little piece of music than it is to take the entire thing, which makes absolutely no sense and creates situations where less people sample.

2. As an Artist Whose Music Has Been Sampled

Before I started writing my own music it was very easy for me to say that people shouldn’t care if I sample their work, or that using somebody else’s music as my main idea and melody was OK.  To say the least, my opinion has shifted a bit since I started writing my own material.  Now I feel like we should be more sensitive to those we are sampling, and that building a career off sampling will ultimately lead to a dead end.

The truth of the matter is that writing a great melody is hard as hell.  Anybody that has written one knows this.  I believe most hip-hop producers appreciate a great melody at an aesthetic level and for its’ value as a great sample, but I don’t think they fully understand the process of writing a great piece of original music in the same way most writers do.  I know for a fact that if somebody jacked my melody without permission and made a song I didn’t really like, I might be kind of upset.  If the song blew up I would be even more upset if i weren’t given proper credit or compensation.

However, the biggest difference between me and many of the music composers who get sampled is that I think the degree to which an artist who samples my work should have to pay me should be based upon how much of my music they sampled, and how much they have transformed it.  Unfortunately, it seems like most lawsuits are based around an all-or-nothing approach.  Meaning that you pay the same (through the nose), whether you sample a small amount or a large amount.  This is a big problem with sampling and brings me to the main issue.

3. As an Owner of The Rights to the Songs

Many people do not know this, but most of the artists who release music on major labels do not own the full rights to their songs.  They sign away most, if not all, of their rights when they allow the labels to market and distribute their recordings.  The remainder of these rights are often bought by publishing companies when artists need money and have to find new ways to make money off their songs when they’re not in the public eye anymore.

Knowing this, it should come as no surprise that sampling laws and rates are as extreme as they are.  And to tell the truth, they will only get worse as the industry seeks to find alternate streams of income to replace lost record sales.  Labels and Publishers take more and more until the artists don’t really own anything, and can’t even perform their own songs without paying somebody else.

The owners of the rights don’t care about anything other than making as much money as possible and most don’t even care about the integrity of the works. They’ll take the most revolutionary song and license it to McDonalds or a stupid political campaign add if you let them.  Sadly, most artists have no say in where their music appears.  The really smart and powerful ones have better deals in place and have retained their ownership.  But most of the pop artists you see don’t write their own material and have very little say in how their music is used or exploited, and this includes sampling.

I don’t expect this part of the equation to ever change.

While I will always be an advocate of being creative and using samples, I fully understand that sampling as we once knew it will probably never return as the mainstream style of hip-hop production.  The owners and publishers have made it entirely too expensive to do so, and they’re even policing underground artists nowadays for uncleared samples.

I think the sampling rates should be less expensive and the sampling laws should be less strict.  This would inspire more people to sample legally, knowing they could really push the music further without the fear of a lawsuit.  More people sampling legally translates into more money for the music industry as a whole and more diversity in the music.  That’s something we can all get behind.  Until then, there will be more synthesizers and studio musicians and less samples.

Sadly, the way the record industry and major labels have handled sampling is the same way they handled the introduction of MP3s and downloading.  They fought tooth and nail to get napster removed, but failed to understand that a) illegal downloading would just pop up in other venues and b) that kids were tired of spending 17.99 for CDs.   They could have seized that opportunity to work out something that would have increased the entire market.  Instead they held tight to their old methods and, as a result, have seen sales decline as music listenership has increased.

Getting the major labels and publishing companies to relax their rules to allow more flexibility in sampling is the key, but I’m not too optimistic about that happening.  Until then, sample what you want, but be aware that if you get too popular it could get you into a lot of trouble.