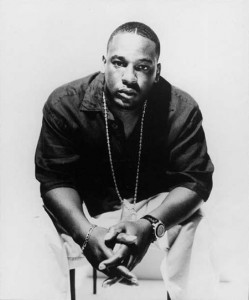 For those that have been listening to hip-hop as long as I have, the artists and time periods that have influenced my music are pretty obvious. My first album solo album, 1988, was probably the biggest example of this, but even on the Soul Position albums I was exercising my influences. I’ve always paid homage by referencing lines, phrases, and samples that I considered classic. I’ve even went as far as rewriting entire songs (e.g. “No Half-Smokin”). I guess I’m just a huge fan of hip-hop, and will always be.  Hip-hop has influenced my life in a way that no other artform has; taking me places I wouldn’t have gone and showing me things I definitely wouldn’t have seen otherwise.  It’s only right that I pay homage.

One of the most common misconceptions about me is that most of my musical influences come from the 1988 school of hip-hop artists that included KRS-ONE, Chuck D and Public Enemy, Eric B & Rakim, and Slick Rick. Those artists were a huge inspiration, but more in the sense that they showed me what hip-hop could be.  They were walking examples of the artform’s potential at a time when the mainstream media had yet to really recognize it and still thought it was a fad. They weren’t just making music for themselves, I believe they each knew that the world was looking at hip-hop as a whole, and that they were representing something much bigger.

Where the previously named artists showed me what hip-hop could be, another school of emcees came after them that made me want to actually be an artist.  Most of this school of emcees came out between 1993 and 1995.  I consider these artists to be the “second wave” of my hip-hop influence: Nas, Buckshot from Black Moon, Organized Konfusion, and a much lesser-known rapper named O.C..  These emcees were stylistic influences to the way I rhyme and approach the mic.

I first heard O.C. when me and some friends were watching Rap City.  This was in 1994,  when West Coast gangster rap had exploded on the scene and East Coast rap had started to be pushed to the back.  In terms of mainstream coverage and what the average hip-hop fan was listening to that time, gangster rap was winning big.  Even among my four friends watching Rap City with me that day, I was the only one who was still riding for East Coast rap.  They weren’t really trying to hear any of that shit.

Then a video came on called “Time’s Up” by a rapper named O.C.

As soon as his first line came out, “You lack the minerals and vitamins, iron and the niacin, fuck who that I offend, rappers sit back I’m bout to begin,” everybody in the room was silent.  His voice and his delivery was amazing.  But what really hit everybody was his content.  This was a brand new East Coast rapper who was unafraid to challenge the gangster rap image at a time when nobody was doing it. Even though we had all grew up on and been influenced by conscious hip-hop like Public Enemy and KRS-ONE, those groups weren’t in the forefront anymore and hip-hop had made a drastic shift towards gangster rap.  O.C. was speaking to the core of what we knew was real and was right, whether it was fashionable or not.

So why you pushin it? Why you lyin for? I know where you live
I know your folks, you was a sucka as a kid
Your persona’s drama, that you acquired in high school in actin class
Your whole aura is plexi-glass
What’s-her-face told me you shot this kid last week in the park
That’s a lie, you was in church with your moms
See I know yo, slow your roll, give a good to go
Guys be lackin in this thing called rappin just for dough
Of course we gotta pay rent, so money connects, but uhh
I’d rather be broke and have a whole lot of respect

The song “Time’s Up” went on to become an underground classic and one of the best singles of 1994.  My friends and I chipped in on his album Word…Life on cassette tape (yeah it was that long ago).  We couldn’t wait until his “Time’s Up” music video played on Rap City every day.

Unfortunately, O.C. was signed to one of the worst record labels at the time, Wild Pitch Records.  They were known for having amazing talent (Lord Finesse, Main Source, Gang Starr, Ultramagnetic MCs, etc.), yet never getting their artists the shine they deserved. Most of their artists would do one album and either end up in limbo for several years or immediately leave the label.  Par for the course, we never saw a second single or video from O.C.’s debut album Word…Life.

Outside of his cameo verse on the Crooklyn Dodgers single, O.C. pretty much disappeared from the spotlight.  This was before the internet and blogs, which meant that if the Source Magazine wasn’t writing about you and Rap City wasn’t playing your video, you were off the grid.  Knowing what I know now, I’m sure that time was spent trying to get out of the shitty contract he signed when he was just 20 years old.

His next album, Jewelz, came out three years later on a different label, PayDay Records. Payday wasn’t a great label either but they were better than Wild Pitch.  It was clear O.C. was in a better label situation this time around because the legendary DJ Premier was handling most of his production.  The first single “My World” was fire:

In typical O.C. fashion, the opening line told let you know exactly what was up.

I waited long time sweatin’ it
I got jerked but now I’m gettin’ it
Hazy like asthma, bizarre disaster
Stress almost held me back from being a master

As far as we were concerned, O.C. was back.  His album, Jewelz, was one of the best albums of 1997.  Things seemed different this time, but they weren’t.  One single was all he would get this time around as well, and once again O.C. disappeared.  He returned in 2001 on a completely different label and dropped a bad album, and that was pretty much all she wrote.  Most of his hardcore fans, like my friends and I, gave up on him.  He dropped some minor releases that I would check for every now and then, but nothing that made me or any of my friends take notice.  It seemed like he had lost his fire and was going through the motions.

That was until last week when O.C. dropped the album “Trophies” produced by Apollo Brown.  A good friend posted one of his new songs “We The People” on Facebook and told me the album was incredible, so I checked it out.  I bought the album yesterday and have listened to it no less than 5 times already.

I’m not sure how he did it, but O.C. managed to drop the best album of his career 17 years after it began.  I would go so far as to say it’s the best rap album I’ve heard so far this year.  The beats are crazy, and the rhymes are as heavy and as relevant as ever:

“So many taking on the Prince symbol. The princess cut her hand on the spindle. The rap game has been left unattended to the point that chaperones need be in attendance” – O.C.

I think he’s a better writer now than he ever was.

As I was listening to this album last night I decided that I had to give props to an artist who has inspired me for almost two decades.  In hip-hop we have a bad habit of honoring our heroes and inspirations after they’re dead, but I don’t wanna do that anymore.

In the past, O.C. inspired me just as an emcee, but now I’m inspired by him as a human being.  For the first time, I recognize the journey and hardship he’s had to go through just to be able to release music now. The kind of hardship that many lesser artists have succumb to and retired behind. He’s persevered through several bad contracts and dealt with the death of his close friends (D.I.T.C crew member, Big L), only to drop the best album of his career. I’m now inspired by him in a completely different way, as an example of what it takes to persevere.

O.C. was caught up in contract disputes and label problems during the best parts of his career.  He dropped three albums on three different labels and had to wait 3-4 years to get out of each bad contract.  That’s over ten years of what we thought were his prime years on the sideline, yet this cat still has the fire to do great music, all because he loves to do it.  He will never be a household name, but what he has managed to achieve after all these years is no less admirable in my eyes.

Big Ups to O.C. for inspiring me throughout the years.

“Everybody want they trophy.  what is that supposed to tell me that you did something? i don’t need to God Damn Trophy, or award, or recognition. I do this shit cause i love this shit.” – album intro to Trophies album.