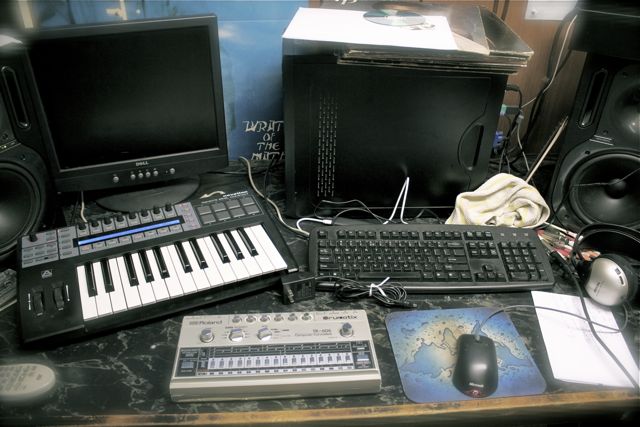 As I was looking around my house today, I started noticing all the things I’ve invested in to be able to do my job properly. From records and record players, to mics and recording equipment, to samplers and keyboards. To say the least, I’ve definitely invested a decent amount of coin into gear. All in hopes that it would help me better perform my job.

Unfortunately, there are no guarantees that anything you buy is going to totally work out. I have to admit that the amount of things I’ve bought that made an immediate impact isn’t significantly higher than the amount of things that were complete flops. You win some and you lose some, I guess.  I wish there were a shorter way, but sometimes to only way to truly find out how beneficial something will be is to try it out yourself.

The whole thing got me thinking about what items I’ve bought that have been the most useful to my career. I thought about it for a while and came up with an answer that might surprise you.

Truth be told, the piece of gear that has been the most useful to me wasn’t really a piece of musical gear at all.

It was my camera.

While I was on tour In 2011, I bought a Canon t2i camera from somebody on Craigslist in Austin, TX.  It wasn’t an impulse purchase at all; I had been scoping them out for months back home but just couldn’t find one in my price range.   I had stopped drinking the year before and decided that the only way I was gonna stay out of the bar was if I found a hobby to put my energy and curiosity into.  Photography and video became that hobby.

Since buying the camera I’ve come to grips with an important reality that I didn’t fully understand when I bought it, which is the fact that Youtube is now the number one tool for discovering music. Not iTunes, not Google, not Bandcamp–Youtube.  When you understand that, you start to see why an artist owning a camera is important.  If an artist doesn’t exist in the largest network for artist discovery, they will have a very tough time.  I didn’t choose this; this is just how it works right now.

As I stepped back and looked at what piece of gear has allowed me to grow the most and make the most impact, there isn’t a single piece of musical gear that can match up with what I’ve gotten out of my camera.  Here is a short list of some of the benefits:

I could go on, but you get the idea.

Owning a camera has allowed me to create video content that furthers my career anytime I want to, and it doesn’t cost me anything.  Not only that, but owning a camera has allowed me to take control of my image.  I don’t necessarily believe I can take pictures better than somebody I may hire to do it, but having an understanding of photography and video has given me a significant insight into the process, as well as what’s best for me. In the past, a video director or photographer may not have understood what I was looking for, but being able to speak the language of photography and video has allowed me to better articulate my ideas to them.

That said, there is not a single piece of music gear I have purchased in the last five years that has had a similar impact on my career.  Not a single one.

To all my fellow artists looking to further your career: it’s important to understand that sometimes the tools which help you the most are not always directly related to your discipline.  In other words, advancing in our field of expertise isn’t always a function of how proficient we are inside of it. The truth is that often times we see the most benefit from learning disciplines that are outside of it. For example, a film director’s career may see more benefit by studying psychology than he would by increasing his technical knowledge of directing.  A writer might see more benefit from studying meditation techniques than by taking additional courses on writing.  An emcee might become a better writer not by writing more rhymes, but by adopting an ambitious reading schedule.

Many people miss these intersections because they are looking for a linear path to where they want to be. But the path to success is not linear. Nor is it simply a matter of mastering their respective craft as much as it’s about seeing the angles that provide the most impact.

Explore the intersections, see the angles, enjoy the benefits.