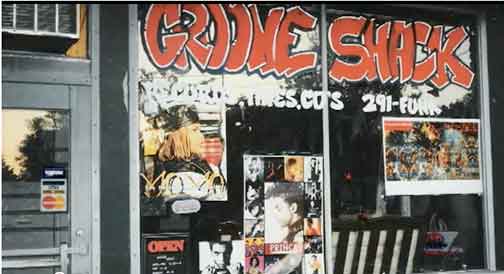 In 1995 I was just beginning my exploration into actually making hip-hop.  I grew up in Columbus, but was living in Springfield, Oh at the time going to school.  Inkwel and I had formed Greenhouse Effect during late night freestyle sessions, been to the studio a couple times, but had yet to put out any recorded material or even do a real show.  It would be quite some time before either of those things happened.  At that time our main focus was to just be a part of it in any way possible, which was easy in Springfield since we lived there, but easier said than done in Columbus, which was 45-minutes away.  As far as Columbus went, we were strictly observers.

Part of our experience at the time was visiting Columbus every chance we could get to catch shows and learn about the scene.  Everything was so new then and the Columbus hip-hop scene was the closest any of us would get to being at a New York park jam.  The scene was so raw; DJ battles, emcee battles, shows in weird places (because venues didn’t really allow local hip-hop in the doors in those days).  I would come to Columbus to visit my family almost every other weekend and find time to dig for records there as well.  One of the record stores I would visit was The Groove Shack.

Around that time, the public access channel started airing a show called The Groove Shack, a 30-minute show that featured the record stores’ monthly open mic.  If you were just getting into hip-hop around 1993-1994 and turned on your television and saw a room of 100 people packed wall to wall, freestyling at a high level, and battling I guarantee you it would be something you would never forget.  I know this was the case for me so I made up my mind then and there that I had to visit one of these open mics.

I considered myself a pretty decent rapper at the time, but going to the open mic at The Groove Shack was a humbling experience.  I remember getting there late, after the open mic had ended, and the sidewalk was filled with emcees ciphering.  And really good emcees too, much better than myself.  I saw a young skinny white kid freestyling (back then being white and rhyming wasn’t as common as it is now) and an older kid interrupt him and challenge him to battle.  The younger kid absolutely destroyed the older kid.  The younger kid ended up being a teenage Copywrite.  Another time I went I saw Camu and Rizza Ray from the group Spirit go back and forth with some of the craziest rhymestyles I had ever heard at the time.  To put it into perspective, this would’ve been like seeing Busta Rhymes and Pharoahe Monche in their primes walk into a open mic, take over, and not let anybody else rhyme for 15 minutes.  Everybody there was rhyming all regular and linear and then these two cats come out and take over with crazy styles and patterns. It was amazing stuff, and I knew that I wasn’t ready.  I wasn’t able to watch the show very often or visit the open mics very often since I lived in another city but it had made it’s impact on me.

Shortly thereafter, The Groove Shack record store closed its doors.  Although it was only open for 3 years, it’s legacy remains.

The open-mics at the Grove Shack shined light on a lot of talented Columbus artists, but the major product of that era to emerge on a national scene was The MHz crew, only teenagers at the time, and consisting of Copywrite, Camu Tao, RJD2, Jakki The Motormouth, Tage Proto.  The MHz went on to release the first indy 12″ from Columbus and basically put our scene on the map, opening the doors for what myself and Weightless (me, Illogic, Greenhouse Effect) would later carry on.

About couple years back, news started to spread that they were doing a documentary on The Groove Shack and that many pioneers of the scene were getting interviewed for it.  People were getting excited.

But as with any hip-hop related movie my first thought was “please don’t fuck it up“, because hip-hop movies can be really hit or miss, and we all know there are some pretty bad hip-hop movies out there.  As to why I feel personal shame when these movies stink is beyond me.  I guess I’ve got more pride than I care to admit when it comes to this artform and how it’s represented.  And when you combine that general hip-hop pride with the fact that the movie is actually about something that I saw first hand and relate to personally, the result was me being pretty damn skeptical about how The Groove Shack movie would turn out.  I decided to watch the trailers for the movie but still wasn’t sold.

But regardless of my skepticism I went to the screening for The Groove Shack tonight and I’m glad that I did.

Was it perfect? Nope.  But it was pretty good and it was accurate.  And when you consider the fact that the director of the documentary was one of the owners of the shop, a first time director, and how personal the story of the rise and fall of his record store is to him, you have to give it up.

I saw something in there that I never really anticipated going into it, and that was emotion.  A genuine connection between every person in that audience and that film.  I have never experienced that before and I may never experience it again, but it was real.  People cheering and clapping at the classic battle footage of The Intalec serving entire crews of rappers; people getting excited about songs playing in the background that nobody outside of the people in that scene may even know;  the dead silence when Camu talked about how he found out about the lung cancer that he would ultimately lose his life to.  (Adding to the emotion of this scene was the fact that the actual movie reel stopped while Camu was talking and his image was on the screen for about 5-minutes until they got it back on track, while the audience waited in almost complete silence)

Things that I never saw or knew about were introduced to me; familiar faces put with rap names that I had only heard about; actual footage put to battles that were folklore to me.  I felt like I had been given the pieces to put together a piece of Columbus hip-hop history that I missed.  The foundation of the scene that I have been allowed to become successful in, summarized on screen.  Any skepticism that I had quickly went out the window.  I felt like I was watching the Wildstyle of Columbus hip-hop and it made me proud as fuck.  New York has theirs, now we have ours.

I don’t want to get too much into the ins-and-outs of the film.  I don’t even want to write a “review” where I render praise or criticism because I feel like the film deserves its moment and accomplishes exactly what it set out to do.  Some will understand it, some will not.  I will say this though; if you are a Columbus hip-hop artist, then you need to watch this film.  Know your history and celebrate it.  Because without those cats that planted the seeds, none of us would be here right now reaping the benefits of their hard work.