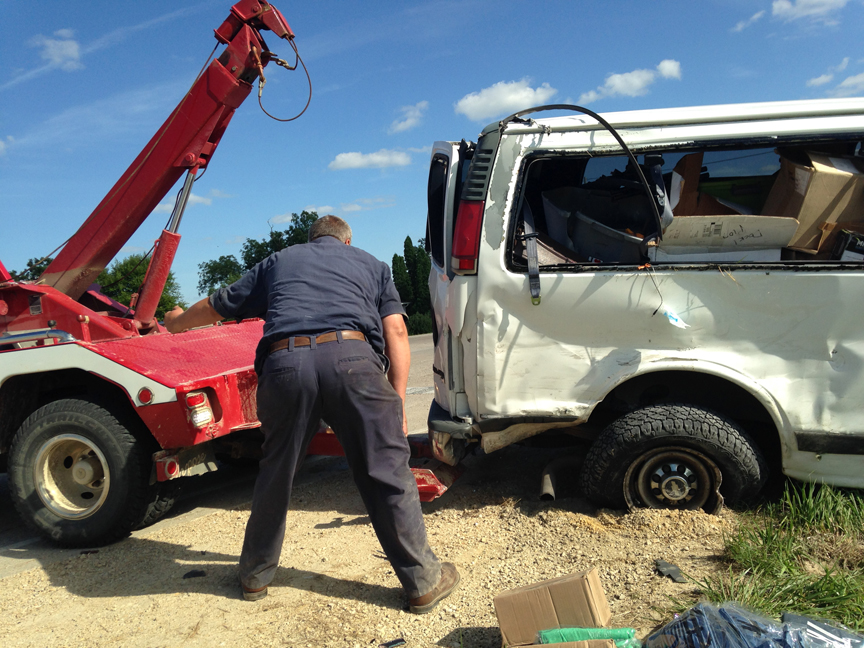 I woke up this morning with mixed feelings. I was energized by the fact that my fans wanted to see us finish the tour and chipped in to help buy a replacement van, but a little bit discouraged because I hadn’t been able to actually find an alternative van to buy here in Moline.  There was literally almost no 15-passenger vans available in this city, and those that were available were cargo vans or at least 100 miles out. Even more discouraging was the fact that I hadn’t been able to even find one to rent. Renting wasn’t my ideal solution, but I was ready to do it if I couldn’t find anything solid to buy.

Most people have no idea why renting wouldn’t be an ideal solution for me, so I’ll try to explain.  The first problem with renting (vans, gear, etc.) from a foreign city is that you are often faced with logistical problems when the tour ends. It could mean you have to drive the van back to where you got it (time & money) after the tour ends and buy another flight home (time and money). Or it could mean that you have to get a storage unit and leave certain things behind because the rental doesn’t fit everything you’ve already got into it.  My second problem with renting is price.  What I’ve noticed is that the price that you pay to rent a 15-passenger van per week, over the course of a few weeks, is often equivalent to what it would cost to just buy a decent used van outright. Also, because they cost so much per day, they eat away at your profit.  On a big tour it might not matter, but on a small tour like this, adding another $150 per day in expenses would be significant.  The third, and most significant, problem I have with renting a van on a tour like this is that at the end of the tour, after you’ve paid all that money to rent it (often 5-10k), you have to give it back because you still don’t own it. I would return home still without transpo because my van was totaled.  Renting can be a good solution in some instances, and isn’t the worst scenario for a tour like this where we only have 10 shows left, but it’s not a good long term solution for a touring artist like myself who uses it year round and every year.  For an artist like myself owning is always the best strategy.

But even though renting wasn’t ideal for me, our lack of time made it a reality—provided we could actually find one to rent. And that wasn’t looking good. If we couldn’t find anything we were gonna have to cancel tonights show in Oshkosh.

I finally got a reply from one of the vans in the area that I wanted to buy telling me it was already sold, so the day wasn’t starting off with much good news. 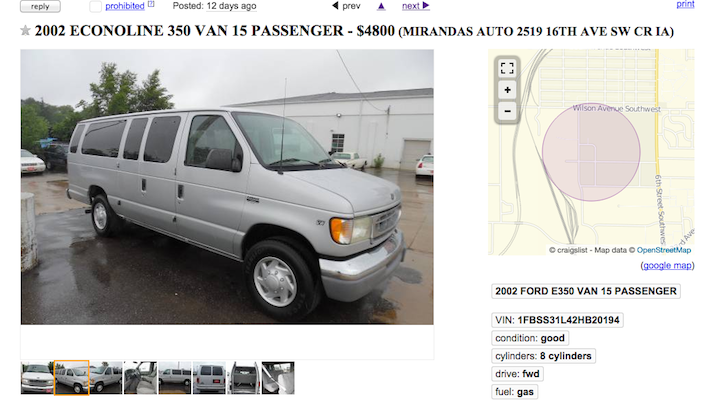 I got a text from my guy RJD2 asking if the van I saw last night worked out, and saying that if it didn’t work out I was more than welcome to borrow his van.  We had spoken about it briefly the day before when I was on my way to view the other van in Sonomauk, but at that time we had come to an impasse on it because there was nobody who could get it to us in Illinois. We knew that it would be damn near impossible to find anybody who had a free enough schedule to make that drive back and catch a flight home. The previous day, I felt we would have been able to find something to buy or rent before that became necessary.  But here it was, two days since the accident and I was running out of alternatives; still stuck in Moline with the means to buy a van but not the access to them.

The next text I got was from my friend Bobby Silver who toured with me in 2011 as my bass player.  He told me that since I was having problems finding an alternative, he would be willing to drive his van out to us in Moline today for us to borrow and then catch a flight back home.  I was almost in disbelief about the timing. It was an amazing gesture.  He said if I was down he would get on the road at 1pm. The only downside was that we would have to miss our show in Oshkosh because we wouldn’t have the time to get there. I spoke to my booking agent to see if our people in Oshkosh would allow us to reschedule that show. Once they said they were ok with it, I agreed and Bob started heading our way.  Bob got here with his van around 9pm CST and I cant tell you how happy I was to see him.  He already had his flight home booked to leave first thing in the morning.

It’s an amazing gesture and I appreciate us so much for it.  Now that we have some temporary transportation we can confirm with all the remaining cities that we will be there and I will be able to search for a replacement van in cities that have much more of a selection than where we’re at now. I’ve still got to give Bob’s van back next weekend, but so much anxiety has been lifted from us now. Not just the self-imposed pressure to continue the tour, but the additional responsibility of making sure I do the right thing with the gofundme contributions of my fans. The last thing I wanted to do was to buy a van that wasn’t proper under pressure today.  That is not a concern for the time being.  Now the goal is to play the remaining shows and search for a replacement in each city so that we don’t miss a beat after I return Bob’s van.

To tell the truth, this was a scenario that I never would have predicted. Never in a million years did I think that people would be willing to sacrifice so much for us to finish this tour. When we climbed out of that van and saw our belongings all over the place and our my van flipped on it’s side, I thought to myself that maybe it was a sign that we should head home and quit. Never did I imagine somebody bringing me a van and my fans contributing money for me to replace mine. Music is everything to me and I have sacrificed so much to be able to do it.  And I have never asked or expected anything for it because i love it and it the joy it brings me is a huge reward in itself.  But to see that your music and character has touched people enough to inspire them to help you when you are down is something that I never really grasped until now.  There have been many times when my fans have told me that my music has gotten them through some tough times, or inspired them, or helped them see things in a completely different way–but I never imagined that the actions of my fans and friends would have the same effect on me. I understand now more than ever that people have been paying attention to what I’ve been doing and building and that it matters.  I write songs like “Persevere” for people to enjoy and be inspired by, but sometimes these songs come full circle and help me push through when I forget why I’m doing this.

For those of you who have been reading these blogs, thank you for allowing me to create a platform where I can be honest and speak my mind.  There is so much about being an artist that most people will never see or understand, but my goal is to bridge that gap on through my writing here.  I’m not perfect, but I only know how to do this shit one way, and that’s by giving 100%.  Maybe somebody will read this and be inspired to follow a similar path. Maybe somebody will read it and understand that artists are people too; that we are imperfect like everybody else, but we do try our best.  And the fact that we still try, despite odds usually being stacked in our favor, is art in itself.