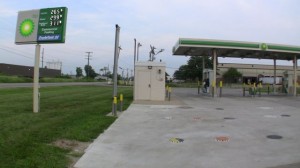 Earlier tonight, I was headed out the house to run some errands.  I needed to return a book to the library and pick up a box from U-haul that was big enough to mail a keyboard in.  My gas tank was on empty so I stopped at a gas station a few blocks from my house.  I live near a lot of factories, and this gas station isn’t really a real gas station, since there’s no attendant and no store connected to it.  It’s in-between a bunch of industrial buildings and there’s just pumps and a shelter over top.  It’s one of those barebones stations that truckdrivers use that you usually see right off the freeway.

Off in the distance I saw somebody running towards me.  My initial thought was that it was somebody homeless, so I tried to speed up my pace since I was only getting ten bucks of gas anyways.  At the same time, I wasn’t sure about the homeless thing because this is a very industrial part of town, and you rarely see homeless people out here.  As the person got closer I saw that it was a female but I couldn’t tell how young or old she was, but I was still pretty suspect about the whole thing.  She was running right towards me.  As she got closer I saw that she was really young, maybe middle-school aged.  She asked if she could use my phone to call her mom and my initial attitude was the typical protect-yourself-because-somebody-might-be-trying-to-get-over-on-you attitude, so I said “I dont normally like to let people use my phone…”

Then I kind of stood there paralyzed, not sure what to do but hoping that my response bought me some time to assess the situation, because I was still trying to process everything going on around me.

For some reason I had the worst thoughts in my head, like as soon as I handed her my phone she was gonna run off with it, but then I came to my senses and checked myself.  Then I really looked at her and tears were swelling up in her already red eyes.  So I said “ok, but tell me the number and I’ll dial it.”  I dialed the number, her mother picked up, and I handed her my phone.

I sat down inside my car, and the girl sat down next to the gas pump outside of my car and started crying.  I started imagining how bad you feel when you’re a kid and you get lost and you have to get your parents to get you because you’re somewhere unfamiliar and you’re scared.  And I thought about how we’ve all been in that situation and how quickly I had forgotten.  I was already emotional about Mikey’s (Eyedea) passing and upcoming funeral, so while the little girl cried outside my car waiting for her mother, I sat inside my car and started crying too.

It took her mother about 20 minutes to get there because they were unfamiliar with the area, and got lost a few times because of construction going on nearby.  She thanked me for sticking around and helping her daughter out, who she revealed was only 12 years old.  Apparently there was a problem with the school buses today so they had her daughter catch the public bus home, and because of all the construction she got confused and got off at the wrong stop.  Where she got off at was all factories and I was the first person she saw after she started walking.  Her mother said that she almost ran out of gas trying to find us, and asked if I had a couple dollars I could spare  so they would have gas to get home.  I had her pull around to the pump and put ten bucks in instead of two.  She said that if she saw me again she would repay me for what I had done and I told her not to worry about it.

As I was pumping I was thinking about my problems, or what I had been calling my problems, and how everything I was stressing about was pale in comparison.  My problems, though they may be real, were nothing compared to not having the things you need at a basic level like gas to pick up your lost daughter.  As I pulled off I cried a little more.  They were very gracious and thanked me repeatedly for doing what I did, but I was wrestling with the guilt of my shortsightedness, and seeing that I hadn’t even really been considering how blessed I really was.

The whole thing took about 30 minutes, so by the time I dropped off the library book and got to U-haul it was 6:59pm.  The lights in the sign out front was out but I saw somebody walking out and asked if they were still open. He said they close at 7pm and I had one-minute.  He asked me what I was looking for and when I told him I needed a box he told me to come on in.  Dude worked there and let me find the box I needed without rushing me or anything.  He didn’t even have to do that.

I thought about how I perceive the world to work, and how sometimes I assume everybody is fucked up and selfish, so it’s better off to just stay in your little shell and protect yourself.  But this one trip to the library made me feel like maybe the problem is more with me than with the world around me.  There are good people out there, and we all need a little help sometimes.  We’re all more alike than we are different.