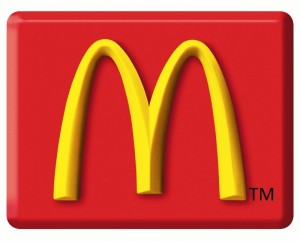 A couple weeks back I was taking a break from some home remodeling work and decided to hit up McDonalds up (i know i know McDonalds is the devil, just hear me out).  Since i was on the north side of town i hit up the one in Clintonville, one that i had never been to before.

As i sit down to eat, to my right I see a table of 3 younger boys sitting together.  They were probably about 13-14 years old.

At a table behind them was a mother with her teenage son.

To my immediate left was a grandmother sitting with her grandson.

On the patio outside was a father sitting with his two sons.

It didn’t really hit me at first but i soon realized that i was the only person in there that wasn’t with his family.  It made me wish my family lived closer, and become a little bit jealous of everybody in there, particularly the young man with his grandmother.  Since they were right next to me i could overhear bits of their conversation.  They spoke about everything from his grades, to how he doesn’t want to drink alcohol right now because he’s too busy with school.  His grandmother didn’t even respond with the typical response i would expect, she just let him finish and told him that he was well aware of their entire family’s problem with drugs in the past, and that if he ever did choose to do drugs or drink alcohol then he would have a tough time putting it down because of their family history.  As someone who’s grandparents always lived over 12 hours away and never had a close relationship with them, i found their level of honesty to be amazing.

It also made me think of how as we get older we kind of outgrow mcdonalds, and start to see it as more of a place for the kids that doesn’t fit into our lives anymore–which is easy to do considering how the place is decorated, the way they push happy meals, and the fact that their spokesman is indeed a clown–but it made me consider something i hadn’t thought about before.  What if the a large reason that we as kids love mcdonalds is not because of the happy meals and chicken nuggets (which we can all agree aren’t that awesome), but because of times like what i had just witnessed?  A mothers spending time with her child, a father breaking bread on the patio with with his two sons, a grandmother talking with her grandson about the future.  All these events matter and may always be rememebed.  Maybe McDonalds is significant because we made it significant through our bonding and family experiences?  Its a place that regardless of your age, there’s something for you there.

Now, don’t get me wrong, I’m not trying to sell McDonalds as this special place in itself or telling you to go out and buy a combo meal.  But what I am suggesting is that our fondness for Mcdonalds may not have anything to do with the food, the playground, or the toys–and everything to do with our families.  And in that sense, it might not be as bad as we think.