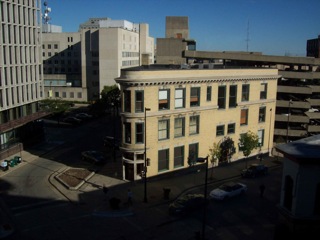 We left Columbus, Oh at 6am on Wednesday morning and got to Madison around 3pm.

The drive in itself wasn’t bad, but driving 9 hours off of 3 hours of sleep doesn’t make it any easier.

The show last night was at the Orpheum and it was sold out.  I’m gonna guess between 1200-1500 kids there.  They were still pouring in after Atmosphere had already hit the stage.

I don’t think I’ve been on a Rhymesayers tour that had so much apparel for sale.  I thought I was gettin busy with my two shirts, then I saw like 30 other shirts for sale and felt humbled.  Shout out to the people who bought shirts last night.

Met lots of cool people last night.  Lots of crazy people out as well. I think I’ve seen somebody get yoked up, slapped up, yelled at, or kicked out of the club almost every time I’ve been to this city.  Let’s just say the nickname “madtown” is fully justified.

I felt bored after soundcheck and didn’t know what to do with myself.  In the past I would always be drinking during that time.  I ended up reading a little bit, but still had some anxiety about not drinking. Despite being offered at least 10-15 drinks I made it without any alcohol.  The gesture is great, so lately I’ve been just taking water or soda instead.

We overcame some serious laptop problems at the beginning of our set.