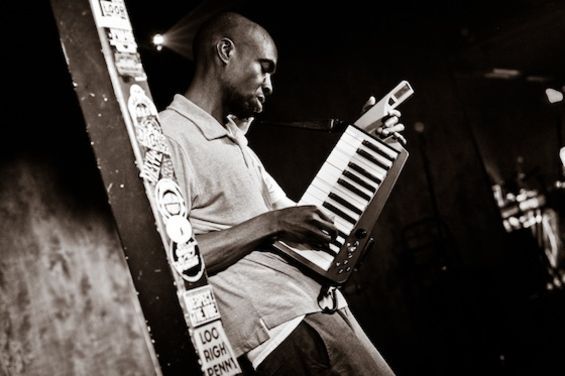 There was a time, back when I was living in a small one bedroom apartment, that all I dreamt about was having more space (and time) to do music. Back then all I had was my MPC-2000, an 8-track recorder, a pair of studio monitors, and my record collection.  It wasn’t much but I did a lot with it.  The fact that I had to keep all that stuff in my bedroom meant that there was a limit to the gear and space I could dedicate to my musical endeavors.  I had a decent vinyl collection in my living room, but it wasn’t anything too crazy because the space I was living in didn’t allow it.

With success came the ability to move into a larger space, which is the house I live in now. I realized that I finally had the room to expand my studio space into what I had always dreamed about, so I did.  About three-quarters of my basement is dedicated to music in some way.  One room in my basement (“the record room”) is dedicated entirely to records and is about 15-feet by 12-feet in size — larger than the entire bedroom I once did ALL of my music in and slept in.  The second room, that I now do all my music in, is at least twice that size.  The only room in my basement that isn’t dedicated to music in some way is my laundry room.

I look around my studio and see three synthesizers, four drum machines, two mixing boards, and other random stuff like outboard lying around.  Couches, chairs, keyboard racks, and shelving line the walls of my studio to store and organize all the stuff I’m now able to keep and use in my musical endeavors.

Even though I do have all the space an artist could ask for, I have often felt like I didn’t have enough.  I constantly thought about other people’s studio spaces and how productive they must be. I wished my studio could be like theirs.  Exactly who “they” are depended on the day, I guess.  I just know that every year I’ve grown a little more unhappy with my own space. I’ve got a good amount of gear, but it doesn’t really work together in a cohesive way. I’m constantly having to unplug things and adopt unconventional ways of working because my current setup doesn’t allow me to move in a straight path from where I’m at to where I want to be. I’m a firm believer that the path towards turning the idea in my head into a reality should be a straight line.  I know there are software solutions that can accommodate all the ideas I have in my head, but I’ve never wanted to risk my creative output by spending long periods of time trying to master new technology.  To say the least, the process of adapting my production setup has been slow-moving. It seems that the studio space that I had always dreamed about wasn’t all that it was cracked up to be.

Around the same time this unhappiness with my own creative space began growing, I had a death in the family that really made me evaluate some things about life and what’s important. Specifically, the material things that we accumulate. I understand that everybody needs or wants certain stuff around them to get through life, but I don’t think we really give proper consideration to what happens to all of our stuff when we die.  Where does all the stuff go? And who’s responsible for sorting it out and physically getting rid of it for us? These are tough questions to ask, but after going through it with my family, and still going through it now, I believe these are necessary questions.

One day I sat in my studio full of “stuff” that I’ve accumulated over the years and thought to myself, “When I die, who is going to have to get rid of this stuff for me?” Just imagining my mother or sister trying to figure out what to do with all the unnecessary stuff I’ve accumulated over the years makes me pretty uncomfortable. I don’t want that for my family or friends. The only thing worse than losing somebody you love is undertaking the painful task of sort through all their stuff, deciding what to keep and what to get rid of. Then deciding how to physically do that, as if mourning their loss wasn’t already difficult enough.

I’ve slowly come to the realization that my desire to have a big studio space was putting me on the track to having much more stuff than I needed. At the beginning, each new thing inspired me in a different way, but I have eventually started to feel tied down by these physical things.  Simple things I used to be able to do like leaving town for extended periods of time to tour or visit family now have to be thoroughly planned out so somebody can watch my stuff.  Selling my house or even relocating seems almost impossible because of all the stuff I’ve accumulated.  I used to envy those who had big studio spaces, now I envy those that aren’t tied down by them.

As a result, I don’t want a traditional studio anymore.

I want to be able to make music anytime and anywhere that I am inspired to do so.  I want to be able to go on tour for two months, or go visit my family for a couple of weeks and still have the same level of creativity and productivity.  I no longer want my creativity to be tied to a physical space.  I would like to be able to produce an entire album anywhere, using nothing more than my laptop’s software and a few small pieces of hardware that can fit into a backpack.  I own a lot of miscellaneous gear, but I don’t think I need any of it anymore.  All I really need is my vinyl for inspiration, my laptop for creation, and my studio monitors to mix my songs on – a return to the simple setup I had when I first started making music.

Fortunately, the technology already exists that would allow me to make this a reality, so I have began my journey on this path.  The first part is choosing a mobile setup of hardware and software that is minimal and works for me. The second part is taking steps to reduce the amount of stuff I currently have in my studio by selling and trading it for things that fit what I want to do now.  I began some of this process a couple of weeks ago and I feel confident that I can have a functional setup and new workflow by the next tour I go on.

I’ll keep you all updated on my progress while I make this transition.  Wish me luck.

p.s. check out this video of hip-hop producer Oddisee, where he explains how he’s been using this mobile technique for many years already.  I found it pretty inspiring.