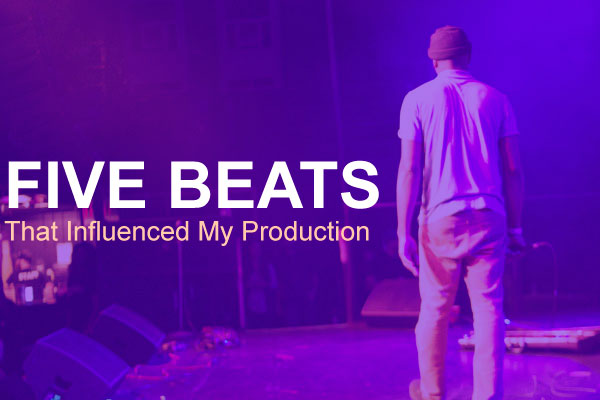 One of the most common questions I get asked is what influenced my production style. It’s a great question, but one that is somewhat hard to answer because I have so many different influences.  There are many more than I can list in a post like this, but I will explain five of the songs that influenced me the most as a hip-hop producer.

“Sucker MC’s” by Run DMC may seem like a pretty obvious and cliche choice–since you would be hard-pressed to find a hip-hop producer over the age of 30 who wasn’t influenced by it–but by no means does that disqualify it from inclusion.  In fact, I consider that all the more reason it should be included.

Long before I ever had any thought of rhyming, DJing, or making beats–this song served as the epitome of what was great about hip-hop.  The beauty of it, for me at least, was it’s simplicity.  The record, even by 80’s hip-hop standards was underproduced; it was just drums and rapping.  There were no cuts, no chorus, and no other instruments.  And even without those things it managed to personify the “less is more” philosophy of hip-hop more than almost any other song of that period for me.  It was next level, but it was also a throw back to what the kids at your school were doing at lunchroom table when they played out beats with their fists.

I’m further reminded of the power of “Sucker MC’s” every four or five years when hip-hop is blessed with another hit song using this stripped down formula (e.g. “Grindin” by The Clipse).

This beat is a master class in how creating something dope doesn’t require you to throw a bunch of samples or riffs in a beat. Simplicity is always the best route.

I remember exactly where I was when I heard it. I had just gotten a small boombox for christmas that year and my routine was to stay up late and record the hip-hop mix shows every friday and saturday night.  In those days, hip-hop wasn’t played during the day on commercial radio, only on 2 hour mix shows on Friday and Saturday nights.  Well this weekend in particular I was visiting my family in Cleveland.  I was at the park across the street with my boombox hoping to find the local radio station and hopefully the mix show when some older kids rolled up on me and told me what station to tune in to.  “Hey Little man, the station you want is <insert stations name here> and they’ll be playing the fresh jams tonight.”  I thanked them and headed back inside before it got dark.

Inside I loaded up a fresh tape and hit record as soon the mix show started.  That’s when I heard “Plug Tunin” for the first time. The beat had a bugged out feeling to it; kind of silly and playful as opposed to darker and edgier production that was heard more often back then. The rhyming took it to the next level. It was the first time I had ever heard MCs use “every other bar” rhyme schemes.  Instead of rhyming every bar like most rappers do even today, they rhymed every other bar.  At first, it gave me the impression that they weren’t rhyming, but when I realized what they were doing it blew me away.  It was one of those moments where I knew that hip-hop would be different from then on.  I eventually found out it was a new group called De La Soul.

In this era, I still had no desire to ever do hip-hop, besides trying (and failing) at breakdancing, but “Plug Tunin” was a song that expanded my horizons as to what hip-hop could really be.  It let me know that it could be anything and that rules could be broken as long as you did it in a fresh way.

#3. “Welcome to the Terrordome” by Public Enemy

I have to admit that I wasn’t too crazy about Public Enemy when I first heard their debut. And that dislike had nothing to do with their lyrics and everything to do their production.  It was just too dissonant and chaotic for my young mind at the time.  Here I was, a teenager who had never even really heard progressive jazz or heavy metal, being served up hip-hop that included the chaotic and avant element of both of those genres.  Most Hip-hop was orderly and understandable, but Public Enemy was not.

By the time their second album It Takes a Nation of Millions to Hold us Back came out they had not only embraced the chaos, but they had began to master it, as proven by their single “Bring the Noise.”  All of the sudden, the very thing that initially pushed me away had began drawing me in.

And once I heard “Welcome to the Terrordome” from their third album, Fear of a Black Planet, they become one of my favorite groups in hip-hop.  I had never heard so many different elements and influences brought together so fluidly.  I can tell you as a person who makes beats, it’s very difficult to do for one beat, let alone a whole album.  “Welcome to the Terrordome” was the most chaotic and the most beautiful thing I had ever heard in my life and the crown jewel of Bomb Squad’s production.  It taught me that even noise is music if a producer’s mind is open wide enough to see it as such.  The producers of Public Enemy, the Bomb Squad, were masters at pulling together everything around them and using it all with beauty and fluidity.

Vibe music. I don’t know where it officially started. But you would be hard for you to convince me that “T.R.O.Y” by Pete Rock and CL Smooth wasn’t one of the first sightings.  It was a song about losing a friend and complicated family relationships that somehow managed to be a banger, a production clinic, and vibe music at the same time.  There’s a reason that “T.R.O.Y.” is widely considered one of the best beats in the history of hip-hop.

The entrance of Pete Rock and CL Smooth was the first time that I had ever consciously paid attention to the producer in hip-hop.  A large part of that had to do with Pete Rock’s visibility in the group.  Not only did he make the beats, he also busted a decent 16-bar rhyme every now and then.  But more importantly was the fact that it was the first time, at least to my knowledge, that a producer’s name was put in front of the rappers. That may seem like a small detail, but it had a huge impact on the perception and marketing of producers and DJs in hip-hop.  For the first time, I found myself trying to understand what went on behind the scenes; becoming curious about collecting records and DJing in a way that I never had before.  I have Pete Rock to thank for that.

I got my first sampler and started making beats in 1996.  That’s a long time ago.  In that time, I’ve seen quite a few different production styles come and go.  From the sample heavy east coast style, to the west coast g-funk style, to the down south 808 and synth style–I feel lucky to have been able to see so many different changes within such a short period of time.

On the surface, “What You Know” by T.I. seems like an odd choice, but it makes more sense once you understand the mechanics behind it.

You see, prior to that beat, most producers were either known for sampling or they weren’t.  Producers like Dr. Dre might be able to play keys, but the majority of his early success was due to sampling.  I’ve always loved sampling, but in 2006 the south was in firm control of mainstream hip-hop, which meant there was very little of it.  Music piracy was taking off and the sales had started to fall out of the industry.  We were underground hip-hop artists, but even we were starting to feel the squeeze of not being able to sample as much anymore.  I had several friends get sued that year.  And it was also the first time we had to turn in a list of what we sampled to Rhymesayers in hopes of staying away from artists/labels that were known for lawsuits.  The landscape was changing, and for the worse for producers whose bread and butter was sampling.

Then, I remember hearing “What You Know About That” by T.I. on the radio.  Hell, it was a  massive hit that you couldn’t escape in 2006.  I remember hearing the song and asking my friends, “Don’t you hear what sample their replaying?”  My friends said it sounded familiar but had no idea.  I kept asking around, but nobody could hear what I heard.  They would ask me what it was, and even when i told them they said they couldn’t hear it.

T.I.’s producers had replayed Jimi Hendrix’s classic “Hey Joe” riff, but most people couldn’t immediately tell because of the context it.  Obviously it wasn’t the first time a hip-hop producer has made a hit song by replaying the melody of a previous hit record, but this felt different.  I think the difference lied in the fact that, in the past at least, hip-hop producers almost wanted you to know they were freaking something that was familiar and everybody knew it.  This was the first time I remember people being unable to recognize a sample so obvious simply because it was played with different instruments and a southern rapper was on it.

That’s when I knew the production game would be different.  The game would no longer be about digging for great records to sample, it would be about digging for musical ideas. Ideas and melodies that you could use as inspiration for your own ideas, which could be played out using different instruments and with slight variations.  Why risk a lawsuit when you can have the same effect without actually sampling?  I had a feeling that from that point forward, overt sampling would give way to producers replaying just the chords from familiar records and not being caught.  The rugged sound that I had know would now be replaced by keys and synths reinterpreting their favorite songs.  The new hit records would feel instantly familiar, but different enough to avoid any lawsuits.  And from what I can see, that’s exactly what most mainstream hip-hop is doing today.

To tell the truth, I don’t even like “What You Know About That” as a song, but I have to admit it’s influence on me as a producer.

Both songs are below so you can hear it for yourself.